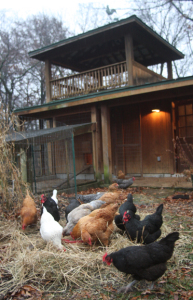 There are lots of benefits to keeping backyard chickens. Turns out one of them comes from simply watching them. Debi Gibson, director of the Maplewood/Richmond Heights School District’s Seed to Table program and the “mother hen” who cares for a clutch of chickens at the district’s Early Childhood Development Center’s teaching garden, says that’s what the employees of the adjacent fast food restaurant do on their breaks. “They bring their lunch out and just sit up there and watch the chickens,” she says.

Roxanne Oesch, a Kirkwood resident and owner of a small flock of backyard chickens, agrees. “My husband even built a bench for me, just so I could come out here and sit and watch them,” she says. “It’s very relaxing.”

Whether for stress relief or the prospect of fresh eggs, more and more city and suburban dwellers are exploring the benefits of raising backyard chickens. If you’re thinking about joining the flock, here are a few things you should know.

For many people, raising chickens is simply the next logical step in growing your own safe, 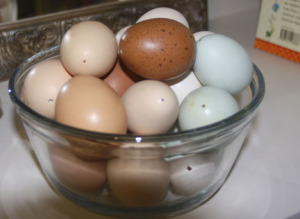 Before you build your coop and buy your chickens, better check with the local authorities to see what laws apply in your area. In University City, a permit is required. In the City of St. Louis, you can have up to 4 chickens without a permit. In Maplewood, the limit is 6. In Kirkwood, there’s no limit, but no roosters are allowed (this is true in most communities). Some subdivision by-laws restrict chicken ownership as well, and while it’s not the law, it’s a good idea to check with your neighbors, too, and get the okay from them (bribes of future fresh eggs may help!). Two communities–Richmond Heights and Creve Coeur, recently (as of Feb. 2012) revised or passed new ordinances allowing backyard chickens.) 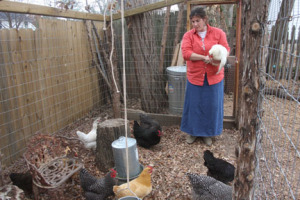 Before you purchase your chickens, make sure you have a safe place for them to roam, rest and roost. Chicken coops can range from small, inexpensive (under $400) pre-formed plastic igloo-looking structures (www.omlet.us)  to large, elaborate Taj Ma-Chicken-Hals! At their most basic, they provide a protected space keeping them safe from the weather and predators, while giving them a comfortable place to lay their eggs. An extension of the coop is the pen or yard, where they’ll be able to cluck and scratch and do those things chickens do. How many chickens and how many dollars you have will affect your choices. You might want to go on a coop tour to see some options. See the Backyard Chickens in St. Louis group at www.meetup.com/stlouischickens/.

Turns out, not all chickens are factory-farm white. Not only do they come is all shapes and 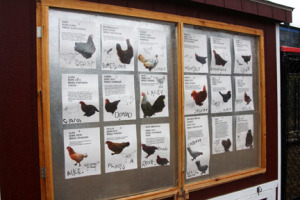 Pictures of the various chicken varieties at Maplewood/Richmond Hgts. ECD

colors, from black to blue to russet and all combinations in between, you can also select them based upon a wide range of other factors, from temperament to egg flavor/color, production and hardiness. Roxanne Oesch researched her options before selecting her chickens for winter hardiness, egg production and tame personalities, purchasing a selection of exotic birds from the Cackle Hatchery in Lebanon, Missouri (CackleHatchery.com).  Debi Gibson selected a wide range of birds for her school garden, for temperament, too, but also keeping educational value in mind. She purchased her flock from the Murray McMurray Hatchery in Webster City, Iowa (McMurrayHatchery.com). Some hatcheries have minimum purchases, so you may want to partner with someone else and split an order.

Feed Your Head…then Feed the Chickens

While there are plenty of online sources to answer questions about chicken care, you can also find lot of local folks to scratch your itch for chicken facts., One of the oldest and best known sources for facts as well as food is OK Hatchery in Kirkwood, where the Krieger family has been purveying chicken and other poultry supplies for generations.

Debi Gibson’s program is also piloting a program called the Community Chicken Project, an effort to promote the backyard chicken movement through classes (one titled “I’ve Got Chickens…Now What?!!”) and publications. Maplewood High School students are even producing a book on the topic, scheduled to be completed in April 2011.

Garden centers are another good source for information. Debi says Garden Heights Nursery in her school’s neighborhood has been very helpful. Bowood Farms in the Central West End has hosted some chicken seminars in recent months, and Greenscape Gardens in West County has a chicken coop on site you can visit, while getting your questions answered.

Finally, if you’re really interested, check out Pat Foreman’s series of books, including City Chicks, Chicken Tractor, and others on raising chickens at home.