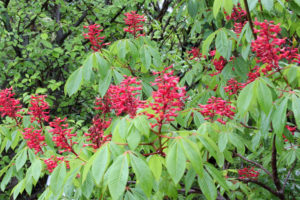 Like the great recession, the back-to-back summer droughts of 2012-13 were a test of mettle in the plant world.

(This article was first published in The Gateway Gardener April 2015 issue.)

Like the great recession, the back-to-back summer droughts of 2012-13 were a test of mettle in the plant world. Many people lost more than hope and many garden plants suffered and even died. The grand walkway of bottlebrush buckeye, Aesculus parviflora (a non-native) at Missouri Botanical Garden comes to mind. In 2012 it died back severely and looked like a tornado swept through it. So did the two patches in the Whitmire Wildflower Garden. After the second knock-down of 2013 they were cut back severely and urged to grow back with a heavy dose of TLC. Last year they began to bounce back. All the while the native red buckeye, Aesculus pavia and Ohio buckeye, Aesculus glabra didn’t miss a beat. They dropped leaves early both summers like they always do, and grew and bloomed normally the following spring yet suffered no die-back. Their tried-and-true dormancy mechanism, a trick honed over the millennia worked flawlessly, giving them the edge over the competition. If it weren’t for the will to pay for and apply copious amounts of water, bottlebrush buckeye might have disappeared from our gardens altogether. They looked awful for three years.

Native red and Ohio buckeyes grow wild along creeks and rivers in Missouri, Arkansas and southern Illinois and so are flood tolerant and good choices for rain gardens and clay soils. Since they typically drop leaves early (late September or October) they are well-placed next to greener-longer small flowering trees like northern blackhaw viburnum (Viburnum prunifolium), fringetree (Chionanthus virginicus) or eastern witchazel (Hamamelus virginiana). Buckeyes flower around Easter when hummingbirds return and tiger 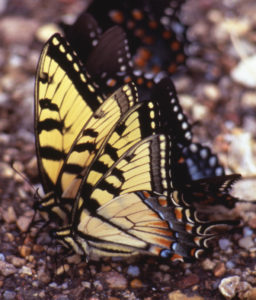 swallowtail butterflies emerge from their over-wintering chrysalis. Look for their telltale yellow and black striped colors in the woods and sipping water from mineral-rich mud puddles. You might create a much-needed mud puddle in your garden or plant its favorite foods, wild cherry (Prunus serotina), wafer ash (Ptelea trifoliate) and tulip tree (Liriodendron tulipifera). When April arrives get out for a hike or an early paddle. Don’t miss the swallowtails and buckeyes that grace our waterways, woodlands and gardens this Easter!