(this article first appeared in The Gateway Gardener in Jan/Feb. 2006)

Look for these winter visitors in your garden! 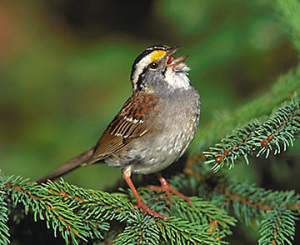 In Florida, southern Texas and southeastern Arizona, “snowbirds” mean one thing: migrating retirees returning for the winter. They come from Canada and Minnesota, Iowa and the Dakotas, looking to avoid the harsh winter months. Of course the original meaning of “snowbirds” refers to the birds that breed in the North but fly to warmer climes in the South. Many of these birds think St .Louis is far enough south for them. Two snowbirds, both sparrows, are now in your garden and will remain there until spring.

The white-throated sparrow and the dark-eyed junco usually come in the middle of October. Seldom do you find a single bird, and often you will find them in mixed flocks. Both are ground feeders and, like all sparrows, will eat any kind of seed. They both prefer bushy areas, even woodpiles for cover.  So put your feeders (I always spill seed on the ground for these sparrows) near a staging area where these birds can easily hide or escape from predators.

In flight, the dark-eyed junco has highly visible white in its tail feathers. These are called “banner marks” and are thought to provide other juncos an alarm when a hawk or cat is at hand. Juncos, when alarmed, fly up into trees, whereas the white-throats will dive into a nearby shrub. The white-throat’s melodic song, often depicted as “Sam Peabody Peabody,” can often be heard near evening all winter long and is easily learned. The dark-eyed junco’s sweet trill is not heard until April. By then the juncos are chasing each other in the garden in a whirlwind of activity. The white-throats are usually too docile to engage in chasing.

By the end of April the juncos have left. The white-throats can be seen in the area until the second week of May. Although I’m always eager to see them come in the fall, I’m equally glad to watch them leave in the spring, for it’s time for them to restart the breeding cycle.