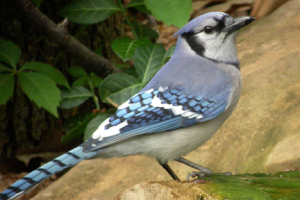 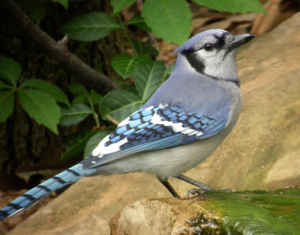 “Handsome Devil” was an expression used to describe bad boys who had obvious good looks, but a rakish reputation. In the movies, Errol Flynn of my father’s generation and Marlon Brando of mine come to mind. In the avian world this appellation aptly fits the Blue Jay. Handsome he is and his reputation as a devil comes easily too, as the jay raucously announces himself as he comes to our backyard feeders. With a black crest and dressed in blue sheen feathering outlined in white,  he bobs and hops around the ground all the time screaming and chasing the other songbirds off. You can almost picture a sneering Brando from the fifties movie, “The Wild Ones.”

No wonder Atticus Finch allowed his children to shoot these avian bullies. But just a minute here. Atticus’ naturalist’s skills were downright rusty. And as a lawyer he should have known that under the Migratory Bird Treaty Act of 1918, it’s illegal to shoot any songbird. Furthermore the Blue Jay deserves respect and recognition for its many charms and attributes. When it noisily announces itself at the feeder, flushing the smaller birds into the bushes, don’t think of it as a bully only, for the Blue Jay will also be the first to announce when a predator, be it cat or a hawk, is in the vicinity; thereby, saving the smaller birds’ lives—not that that is the purpose of the jay.

Ah, you say, but what about that Audubon painting of three Blue Jays eating the eggs of a song bird? Is this not reason enough to call the Blue Jay a “thief” and a “murderer?” Occasionally jays will pilfer the nest of a songbird, but studies show that the omnivorous Blue Jay eats mostly mast products produced by oaks and beeches. In fact there are some theories that state the Blue Jay is mostly responsible for foresting North America after the glaciers departed! Unlike squirrels and other mast-eating animals, jays can fly long distances often caching their crops, which in turn often germinate. Audubon magazine  reported that  a recent study found that “Blue Jays are the keystone species in restoring stands of oaks and other mast trees in today’s fragmented landscape.”

Besides eating mostly mast products and in turn planting them, the Blue Jay is a 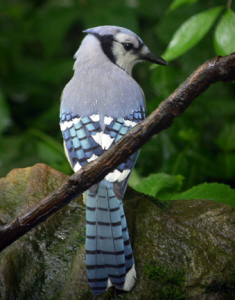 gardener’s friend. Often I have watched the jay plucking bagworms from my evergreens or tearing into caterpillar tents. Jays thrive on insects, not just acorns. Of course, they are more than welcome to all my acorns.  When the acorn crop is scarce, the Blue Jays will migrate south, but very little is known about the jay’s migration. We do know that the bird was a common songbird of the eastern North American woodlands. Now it visits urban and suburban areas as well.

The Blue Jay has other redeeming qualities. His voice is one. An onomatopoeia bird  (that is, one who is named after his voice, “jay jay,jay” that can most often be heard in our gardens), he has a number of other calls and songs as well. In fact his cooing love song that he gives to his mate during the courting season is delightful to hear. Furthermore he is one of the avian world’s great mimics. I have known for years that Blue Jays can mimic the Red-tailed and Red-shouldered Hawks, but I arrogantly thought that it could not fool me. Just a few years ago I heard what I thought was surely a Red-shouldered Hawk in my garden. No, it was the Blue Jay, leaving me red faced, but with a greater appreciation of his Rich Little abilities.

Oh! That color blue on the jay? Like his mimicking of the hawks, it too is fake. The color of the Blue Jay’s feathers is actually black, but because of the pigmentation in the jay, the color appears blue in the sunlight.

No we shouldn’t “shoot all the Blue Jays.” We should admire these “bad boys” (female jays look exactly like the males), and even attract them to our gardens by putting out the sunflower and safflower seeds, for their voices and handsome appearance make any winter day more mirthful.

Connie Alwood is a Master Gardener and co-author of Birds of the St. Louis Area: Where and When to Find Them.

Margy Terpstra is an avid birder and photographer living in the St. Louis area.