(This article first appeared in The Gateway Gardener January/February 2007 issue.) 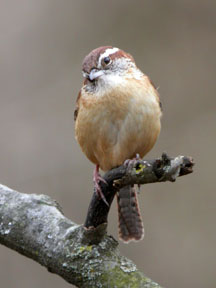 On a January morning we can’t expect much birdsong.  Except for the occasional mockingbird and the partial song of the white-throated sparrow, plus a few chips from other birds coming to the feeder, it’s usually a silent winter. However, one songster still bursts forth with much enthusiasm:  Tea-kettle, tea-kettle, tea-kettle is the mnemonic of the Carolina wren. This year- round resident of the woodpile brings such joy to a winter morning that upon hearing his lively song, most of us will believe that spring can’t be far behind.

The Carolina wren, for some unknown reason, sings year round—rain or shine, cloudy or sunny. Not only does he sing, he has numerous other notes, chips and buzzes. All of them are loud and clear. This denizen of many gardens will visit feeders, and is especially fond of suet. When he arrives at the feeder, it is usually with his tail cocked. Herky-jerky movements are the rule not the exception. He uses his rather long decurved bill to peck away. After getting his fill, he is likely to inspect every nook and cranny around your house, especially the drainpipes, as if he were a bosun’s mate checking the rigging on a topsail.

You need not look high up in the treetops for wrens. They are seldom 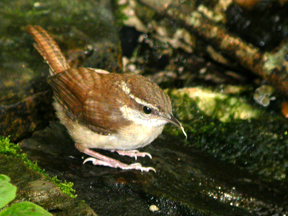 ten feet off the ground. In fact, they are often found on the ground or within a few feet of it.  Carolina wrens are monogamous. In a breeding season they are likely to have as many as three broods. It is not uncommon for them to lay as many as five eggs to a brood. Therefore, they are common. Warm winters have allowed this southern species to expand its range into the New England states.  Although severe winters cause diebacks, the species recovers quickly.

Connie Alwood is a Master Gardener and co-author of Birds of the St. Louis Area: Where and When to Find Them.
Margy Terpstra is an avid birder and photographer living in the St. Louis area. Margy and Dan Terpstra own Hummer Haven UnLtd. Nature Photography. Their note cards are available at the Missouri Botanical Garden Gate Shop.
birding