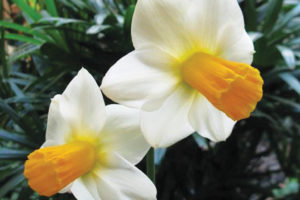 When the daffodils begin to poke their noses up in our beds and borders, we know the glories of spring will soon be with us.

(This article first appeared in The Gateway Gardener April 2016 issue)

When the daffodils begin to poke their noses up in our beds and borders, we know the glories of spring will soon be with us. Daffodils, bulbs of the genus Narcissus, are native mainly to southwestern Europe. There are many different types of daffodils. There are some 50 to 100 species and, unbelievably, more than 25,000 daffodil cultivars, mostly developed in the British Isles. The Royal Horticultural Society of England has established twelve horticultural divisions of daffodils, based on the physical characteristics of each group. The Dutch are second only to the English in the world’s production of daffodils.

The Daffodil World of St. Louis

Here in St. Louis, we are fortunate to have Jason Delaney, an acknowledged daffodil expert, formerly on the staff at our Missouri Botanical Garden where he was North Garden supervisor and bulb collections specialist, and now a horticulturist at Bellefontaine Cemetery and Arboretum in North St. Louis. Some 20 years ago when he was in high school, Jason visited the Garden and realized that some of the daffodils were mislabeled—his knowledge of daffodils already was impressive. His professional ambitions were born on that visit—and he hoped to correct the Garden’s daffodil collections.

A few years after that, he got an internship at the Garden and, upon completing his degree in horticulture, he was hired full-time. There were fewer than two dozen daffodil varieties when Jason first joined Missouri Botanical Garden. Today there are about 600, mainly due to his efforts. Jason began breeding daffodils in 2002 and has a few of exhibition quality in his collection. His finest to date is one dubbed ‘Orpha,’ named for his cat.

The ABCs of Growing Daffodils

Growing daffodils ideally begins with a rich loamy soil that drains well and has a pH of about 6.5 to 7.0. The location should be sunny during the blooming season. Choose fat, firm, large bulbs that promise to produce many flowers. You’ll be happy to note that deer and rodents do not eat daffodils.

Ideally, you should plant daffodils in the fall before the first hard freeze. Planting later probably will result in later blooms as well as shorter stems. The rule of thumb for planting depth is that you should plant bulbs at a depth that is bulb about three times the height of the bulb. This means that big daffodil bulbs should be planted at a depth of about nine inches. Use a balanced fertilizer such as Bulb Booster or other fertilizers that are formulated especially for bulbs. Follow the directions on the package.

Handy hints: Mark where you plant daffodils so that you don’t dig them up by mistake when planting other ornamentals. Don’t plant daffodils in rows like military formations. Planting them in drifts and swaths is far more effective. 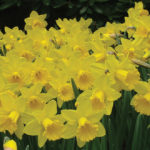 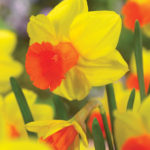 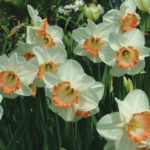 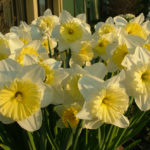 ‘Ice Follies’ (Large-cupped). One of the 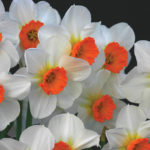 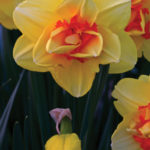 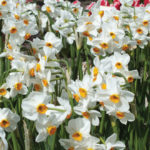 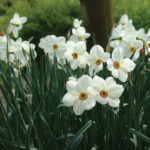 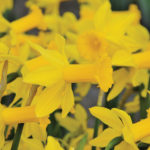 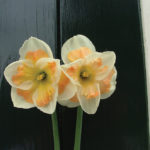 petals.  A bit later to flower; consistent and a strong grower and perennializer.