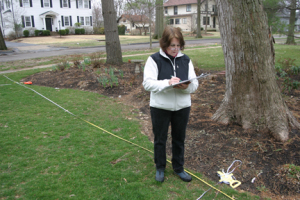 (This article was first published in the June 2006 issue of The Gateway Gardener.)

After the designer gathers information on the site, the next step is to create a conceptual plan.

When designing a landscape, the first step of the process is the gathering of information on the site.  The second step is the conceptual stage, which we’ve been covering the last few articles.  Figuring out what goes where and what is needed to make the plan functional is part of that conceptual stage.

Without proper planning, the landscape eventually begins to take on a scattered, unorganized look.  Compare designing your landscape to remodeling your home.  If you were remodeling your kitchen, for instance, there would be concerns about getting around the kitchen, where things are stored, etc.

The same goes for the outside.  If your yard is not functional, it’s not fun to take care of, nor is it pleasant to look at.  It will appear as if plants were gathered via impulse rather than by following a plan.  The conceptual stage allows you to plan out the yard with spaces that work for you.  Using large circles or odd shapes we call “bubbles” we can begin to arrange those spaces.  Think about where you can place things such as living spaces, dining spaces, play areas, work areas, secret garden areas, lawn areas, etc.  After you’ve done that, you can begin to put those places to scale and figure out how large or small they can be to accommodate your needs.  After figuring those spaces out, we can then start applying plants.

The trick, however, is picking the plants.  We try to save naming plants until near the end of the design. At this stage it is more important to simply identify plants according to their role in the landscape. One of your “bubbles” might have the word “screening” written in it. Rather than immediately pick white pines for the screening plant, let’s go through some questions first.  Is this an area that needs to be screened all year long?  If it only needs to be screened when you are sitting on a deck or patio, you can broaden your selection by including deciduous plants because you won’t be on the deck in the winter very often.  Is it something that must be screened by a tree, or will a tall shrub serve the purpose?

If white pine had been automatically chose for the screen, look at how many limitations would have placed on the situation.  Instead, the door has been opened to many plants that could provide the solution.

Identifying specific plants in the design also reduces choices for other plants. If we immediately assign a river birch to a bed, for example, we now have to pick only plants that will thrive in the same type of environment as that river birch, which takes a lot of plants off of the palette.  If instead we pick our plants using other criteria, we keep that broad palette until the end when we actually name the plants.

Jerry Pence is an award-winning designer and Vice-President, Design Management & Horticulture for a local property management company, where he oversees grounds for properties in St. Louis and Florida. He also has been an instructor in the Horticulture Department at St. Louis Community College at Meramec for 15 years.