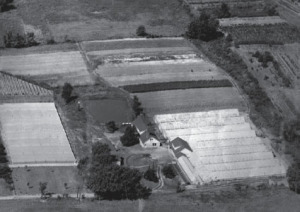 Long before airplanes and refrigeration made it possible to ship cut flowers from halfway around the world, people in the St. Louis area enjoyed the beauty of cut flowers grown right here. And Des Peres was one of the largest centers for cut flower production in the area.

Early German immigrants settled the area now known as Des Peres in the late 19th Century, purchasing large tracts of land sold off by the U.S. government. These European immigrants brought with them a love of flowers, and many turned their farming skills toward growing flowers for the cut flower trade. By the dawn of the 20th Century, there were approximately 8 acres of greenhouses blanketing the area within the current city limits.

A truck farmer, William August Meier built the first greenhouses in the area in 1904, and his sons, William J. and Charles, followed his lead, purchasing nearby land and starting their own greenhouse businesses. Included among Charles’ greenhouses were two he acquired from the 1904 World’s Fair horticulture exhibit.

The Meier’s exited the business in the early ‘30s, and several families took over their greenhouse operations, many of which are still operating today. Brothers John and George Tomasovic purchased Charles Meier’s greenhouses in 1931, including the World’s Fair buildings, and became famous for their prize-winning carnations, also growing a variety of other cut flowers for sale at the St. Louis Flower Market.  In 1969, John Tomasovic Sr. took over the business, and today, his son John L. Tomasovic Jr. and his wife Beth continue to manage the wholesale operation of what they claim is now Des Peres oldest continuously operating business.

In 1947, brothers Harold and Herbert Ahner acquired some of the Meier’s greenhouses, and continued the family tradition of growing carnations, mums and snapdragons (their father had also been growing flowers in Kirkwood since 1906). In the 1960s, when cut flower production started receiving competition from South America, the Ahners moved production to potted plants, and today, Harold’s son and daughter, Rich Ahner and Pat Ahner Wurst continue to grow their business at Ahner’s Garden and Gifts.

Some businesses that followed in the Meier footsteps have been lost to suburban progress. Louis Ellebrecht, and later Gottleib Eime, took over part of the Meier’s operations, and the greenhouse/florist business they operated subsequently disappeared with the development of a shopping plaza. Another, Philip J. Goebel, became one of the largest growers in the state, and developed and patented the acclaimed ‘Fire Chief’ carnation, before selling his property in 1960 for retail development.

A couple other historic Des Peres operations are still going strong, though.  Brothers Joseph and George Deutschmann each set up greenhouse businesses in the early 1900s. While some of the Deutschmann greenhouses have been lost to retail and residential development, the family still operates their retail florist and seasonal potted plant business in Des Peres. And while William Ecklemann’s family no longer runs the greenhouse business off Ballas Road that bore his name and had a reputation for wonderful asparagus, Eckelmann Lane is still home to Jost Greenhouses, family-owned wholesale producers of perennials, woody ornamentals, tree liners and field trees, plus a growing specialty in plant production for green roof technology.

Though perhaps a shadow of its past, Des Peres can still lay claim as “The City of Flowers.”

Editor’s update 2011: The Deutschmann operation went out of business in spring 2011, and the Ahner’s recently (Sept. 2011) announced plans to close their business.

Robert Weaver is editor and owner of The Gateway Gardener magazine.