(This article was first published in The Gateway Gardener April 2009 issue.)

Serving Washingtonians “From Cradle to Grave” Since 1951 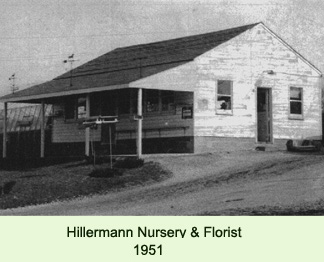 The Hillermann family doesn’t have quite as long of a history in horticulture as some of the other local green-industry families we’ve featured in this series, but in just two generations, they have build Hillermann Nursery & Florist into one of the largest and most progressive garden centers in the region. Their business was named the national winner of Today’s Garden Center magazine’s “Revolutionary 100” for its knack for keeping its business contemporary and changing with the times, and was the only area garden center among Nursery Retailer magazine’s “IGC 100” (Independent Garden Centers) 2009 ranking of the nation’s top garden centers in sales volume. Not bad for a business founder Don Hillermann started in the spring of 1951 “as a hobby.”

The hobby quickly became a livelihood when Don and his brother Bernie, who joined him in 1953, were laid off from their factory jobs in 1954. Since then, Hillermann Nursery & Florist has flourished, moving to its current location on East 5th Street in November 2000. 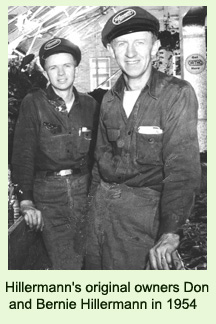 Today, four greenhouses are in production on 15 acres of land, and Hillermann’s has developed a wide-ranging array of products and services, including a huge garden center with a complete power equipment shop, a nursery featuring one of the areas widest selections of new and unusual annuals, perennials, shrubs and trees, florist/gift shop, landscape and irrigation design and installation, grading and seeding, aquatic weed control, snow removal, spraying, and lawn and garden equipment sales and service. It’s said around Washington that Hillermann’s takes care of its customers “from cradle to grave.”

A visit to Hillermann’s also should include exploring their many display gardens, including several water features, a rose garden and other displays to spark a gardener’s imagination.

Today, Hillermann’s is operated by the second generation, including Bernie Hillermann’s daughter, Sandi, and her siblings. Sandi has been very active in local green industry organizations, including as the first woman president of the St. Louis Landscape and Nursery Association and the first woman president of the Missouri Landscaping and Nursery Association. Sandi also served as the first woman president and the first time second-generation family member to hold the position as president (as her father had in earlier years) of the national organization, Garden Centers of America. She currently serves on the Board of Directors of the Landscape and Nurserymen’s Association of Greater St. Louis and the Western Landscape and Nursery Association. Hillermann’s has also been very active in the community, helping with Habitat For Humanity, working with Eagle Scouts, the Washington Urban Forestry Council, the tourism department of the Chamber Of Commerce and more.