Orchids Give Your Home a Tropical Touch

(This article first appeared in The Gateway Gardener January/February 2006 issue.) 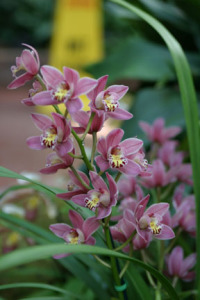 As the final flowers fade on the poinsettia and the darkness of another Midwest winter takes control, we are starving for any sign of the warmth of the tropics. Welcome to orchid season. Every January and February in St. Louis we have ample opportunity to explore the world of orchids. The demand for blooming orchids at this time of the year has soared over the past 10 years. With increased availability, greater ease of growth, and lower prices, maybe it’s time you add a touch of the tropics to your home with the beautiful, long-lasting blooms of orchids.

All orchids belong to the vast Orchidaceae family, including more than 35,000 different species. Orchids are termed as terrestrial—growing in soil—or epiphytic—growing in trees. Most orchids grown as houseplants are epiphytic. Let’s look at some of the easiest orchids to grow in your home.

Phalaenopsis (commonly called the moth orchid) is the 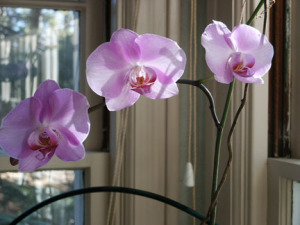 most-encountered orchid in the retail trade today. They are epiphytic and grown in long fiber moss or bark. Plants remain in bloom on average 2-3 months at a time. Good drainage is essential to avoid rotting the roots. Phalaenopsis prefer bright filtered light with very little direct sunlight.

Paphiopedilum (commonly called lady’s slipper) is one of the easiest orchids to grow in the home. Lady’s slippers have unique flowers and nice foliage. A 4” pot can produce multiple flowers. These orchids like to be evenly moist in bright filtered light, and are great for apartments or small spaces. Paphiopedilums are terrestrial and grown in soil and bark mix. They are a great beginner’s orchid. Flowers last 6-8 weeks. 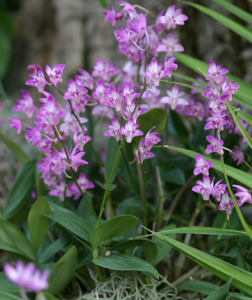 The group Dendrobiums offers customers over 1,600 species to explore. Most grow to be large plants so ample growing space is important. These orchids are epiphytic and grown in long fiber moss or bark. Dendrobiums remain in flower for 2-3 months at a time. Bright light, with some direct sunlight, is essential for good flower production, and good drainage is a must. With bright light, Dendrobium is one of the easiest orchids to get to rebloom.

The appealing Cattleya is the flower that brought all of the world’s attention to orchids. Widely used as corsages, the flowers are large, bold, often fragrant and last 2-3 weeks. They are epiphytic and require abundant light. Once again, good drainage is essential to avoid root rot. There are many new miniature varieties being developed for those with limited space. Cattleya is an old-fashioned orchid that is enjoying a revival in the retail market.

Last but not least is the Oncidium alliance. Often overlooked by orchid growers, Oncidiums come in a wide variety of colors and shapes. They need ample warmth and sunlight to perform well. Oncidiums are epiphytic and most often grown in bark mixture. The flowering period varies with varieties, but average 4-6 weeks.

Any one or a combination of these orchids will help make our Midwest winter more bearable. Caution should be taken as many people have become addicted to orchids after owning just one. So, go treat yourself to a piece of the tropics in the middle of winter.

Container: Terracotta pots are best, since the clay is porous, allowing water to evaporate more efficiently. Some clay pots are made especially for orchids and have slits around the side of the pot to further aid drainage and evaporation. Don’t plant orchids directly is decorative porcelain containers, since they rarely have drainage holes. Instead, place a potted orchid inside the decorative container and conceal the interior pot with Spanish moss or other decorative soil cover. Remove the potted orchid from the outer pot before watering.

Potting Media: Epiphytic orchids are usually grown in a combination of bark (usually fir bark, moss and perlite). Bark comes in three grades. Fine is typically used for semi-terrestrial orchids like cympidiums, miltonias and paphiopedilums. Coarse bark is used for vandas and ascocendas. Medium bark is used for most other varieties.

Light: Filtered sunlight is best for most orchid varieties, usually an eastern exposure indoors that gets morning sun and bright light the rest of the day. Many varieties also grow well under fluorescent lighting. Outdoors, most will do well in filtered shade. Light green leaves indicate good light levels. Yellowing leaves may indicate too much light, and dark green is a sign of insufficient light.

Water and Humidity: Varies with different orchids, but usually once a week is adequate.  Tapering off watering and feeding before seasonal bloom promotes more flowering. The use of humidity trays or saucers with gravel and water will help raise humidity around orchids in heated homes. Good air circulation helps prevent diseases, but keep orchids away from heat vents.

Feeding: Feed every two weeks, except for January and February, which is a resting period for most orchids, and during blooming periods.  Use a high-nitrogen, growth food for six months beginning in March, then switch to a bloom food until buds begin to develop.

Repotting: Bark breaks down over time, increasing the risk of root rot, so repotting every two years is recommended. Orchids rebloom better when slightly root bound, so usually you’ll repot in the same pot. If increasing pot size, never go any larger than 2” above the previous size. After repotting, place in a shady location and don’t water for a couple days to allow it to recover from shock.