Orchid Care for the New Year 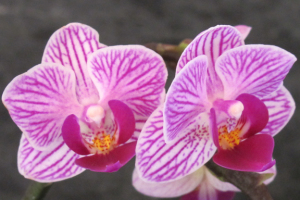 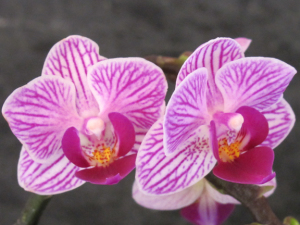 January and February are top months to purchase blooming orchids of all types. But buyer beware! Don’t be tempted by the “Just add ice” plants found in groceries and mass merchant stores. The ice watering method may reduce the store’s loss but is not best for the plant. Plus, “grab n go” orchids’ sitting around by drafty doorways in winter in plastic sleeves can be permanently damaged. Shop for orchid plants at a garden center or nursery!

Find out what conditions your home currently provides, including light, humidity, and temperature, and find an orchid that closely matches those conditions. Most orchids prefer an east or west-facing window.  West or south-facing windows will work for winter, but plants may need to be set further from the window during summer or a hang a sheer drape to diffuse light. A north window is not suitable. All orchids prefer a higher humidity (60-70%) than a traditional home would provide, especially in a cool weather climate. Higher humidity can be obtained with a humidifier or by grouping orchids on a tray filled with pebbles and water. Temperatures for most orchids should be between 60-80˚.  To encourage blooming there should be a 10-15˚ change between day and night temperatures.

Water the orchid thoroughly, but allow it to almost dry out in between 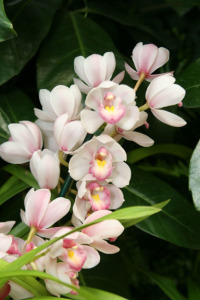 watering.  Learn the weight of the pot when it is saturated with water, as well as several subsequent days until the plant, judged by placing a finger into the soil, needs to be watered.  Once you have felt the weight of the pot at both the saturated and drier stages, you will know when to water your orchid just by picking up the pot. Water your orchid early in the day with tepid water that has settled for a while in the watering can.  Don’t allow water to stay on leaves overnight.

Fertilize orchids with an orchid fertilizer like Jack’s Classic Orchid Special (30-10-10) every two to three weeks according to recommended levels.  Signs of too much fertilizer in the soil include black ends of the root or leaf tips.  When the orchid spike starts, switch to a bloom formula like Jack’s Classic Orchid Bloom Booster (3-9-6) to encourage bud set and promote prolific blooming.

Put a date on your orchid when it’s blooming.  It usually blooms once a year.  Keeping track will help you anticipate the next year’s bloom time and help with your care schedule.

Newly purchased blooming plants do not need to be repotted for a year or so. Wait until the plant is no longer blooming. Orchids, in general, should be repotted every 1 – 3 years during a time when blooming has ceased.  If you can stick your finger down through the bark medium, it may be time to repot. If the plant is not thriving, it may be time to repot and evaluate the care schedule.  I have had several orchid specialists vary in advice on how often to repot. The type of orchid, where you place it in the home and how you care for it will help you determine your own schedule.

Orchids require a special planting medium that includes light organic structural components, such as Espoma, or Fafard Orchid Potting Mix. Compressed coir bricks are also a great value and are very easy to store.  Adding some charcoal will help filter out the fertilizer salts. Planting medium varies according to the type of orchid you are going.

Orchids may be planted in plastic or ceramic containers with a drainage hole.  A recent orchid specialist mentioned clay pots tend to retain salts that will harm the plants. I have not had a problem with this personally, but I also leach the bark mix often and I don’t over fertilize.

Soak or water the orchid before repotting to loosen roots.

Knock the orchid from its existing container and remove as much of the bark/soil medium from the roots as possible.

Trim off any diseased or wilting roots leaving all of the white, firm roots. If it has been awhile since plants were re-potted, you must be thorough about removing unproductive stems, leaves and roots if you want blooms.

What Kind of Orchid to Grow

For beginners you can’t go wrong with a phalaenopsis. Also known as “The Moth Orchid,” phalaenopsis is America’s favorite orchid.  It’s easy to grow, long blooming and comes in a wide range of colors.  If given bright light and moderate water, it will bloom for several weeks.  The typical bloom time is late winter into spring, but orchids can be forced to bloom at other times. Because of the typical bloom time, phalaenopsis orchids make a wonderful alternative holiday plant. After it has bloomed cut the spike down to the leaves.  Or to encourage another bloom cut the spike down to just above a node and a new spike may start from there with more blooms.   If the second method it is used, your orchid may not re-bloom for a year and a half, as it has used a lot of energy for the second set of blooms.