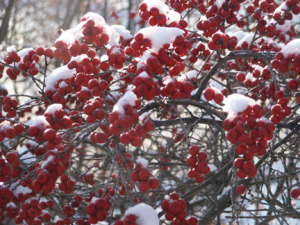 Most gardeners think of winter as down time. The only thing that’s down are the leaves, allowing the opportunity to view the more subtle beauty of the garden. Look outside your window. What do you see? Perhaps a better question would be what don’t you see. Yes, gone are the colorful flowers of spring and summer. Is color missing from your winter garden? Get to know some of our native shrubs and trees that have bountiful crops of berries in the fall and winter months. Adding these into your landscape will provide the sparks your garden may need in this season.

These native plants produce autumn crops of berries with the sole purpose of attracting birds and small mammals. Animals depend on this late fall and winter source of food and the plants depend on the animals for seed dispersal – it’s a win-win situation. Because of this relationship, the berries are noticeable and colorful. Additional color and animation will be introduced into the garden in the form of Missouri’s many winter songbirds that forage for these small fruits.

Perhaps the best known is the deciduous holly, also called winterberry (Ilex verticillata). Many horticultural cultivars have been introduced in recent years including ‘Red Sprite’ (a dwarf form),‘Winter Red’ and ‘Winter Gold’. The native winterberry is spectacular, sporting many brilliant, red clusters of berries on its branches from late fall through the winter months. It forms a dense shrub that can grow to twenty feet or so.

The possum haw (Ilex decidua), a close relative of winterberry, is a multi-trunk, small tree that grows taller, to a height of about thirty feet. This is the more commonly encountered species in Missouri. In appearance and culture, possum haw is very similar to winterberry.

Yet one more Ilex, though wild populations are rare, is the American holly (Ilex opaca). The red berries are set against evergreen leaves making it doubly attractive and quite desirable in the winter landscape. Hundreds of horticultural varieties of this species exist and its branches are a common and welcome sight during the winter season.

All hollies (Ilex) tend to be dioecious, meaning the plants are either predominantly male or female. To ensure an abundant crop of fruit, locate a male plant in close proximity to the female plants. The various species are similar in their cultural requirements – they prefer an average-to-moist location and are tolerant of light-to-partial shade locations.

Hawthorns (Crataegus) are members of the rose family (Rosaceae) and are represented in Missouri with up to fifty naturally occurring species. The downy hawthorn (Crataegus mollis) is the official state flower of Missouri. All hawthorns have clusters of white rose-like flowers in mid-spring and can be quite showy. Like their cousins, the roses, all have thorns so use caution if you are in the pruning mood. It is in the fall and winter months that these small (to twenty feet) tough trees show off with bright orange or red berries. These fruits, not tasty when eaten raw, do make excellent jam or jelly if the birds don’t beat you to them. Native populations of hawthorns are typically found in open woodlands (light to partial shade) and are tolerant of average, dry soil. One of the hawthorns however, the green hawthorn (C. viridis), occurs naturally in low, wet areas and so grows happily in moist soils. 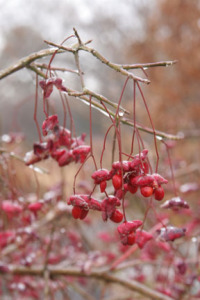 has lost popularity and become a nuisance in recent years. Yet Euonymous atropurpureus, known as wahoo, is not only fun to say but also an intriguing plant in the garden. In early fall, pink capsules appear, suspended on long stems like dangling earrings. After the first frost, these capsules pop open to reveal the scarlet fruit. Wahoo will sprout from the roots and produces a multi-trunk shrub-like form. This thick suckering habit makes it useful as a hedge in light shade. Growing naturally on wooded slopes and along streams, it is at home in the shade garden in both dry and moist soils.

So next time you meditate over a cup of coffee and gaze at your garden, imagine some of these native plants embellishing the winter scene. Imagine also the abundance of birds outside your window, enjoying a profusion of natural foods.

Cindy Gilberg, horticulturist and Missouri native, founded and ran the garden center at Gilberg Perennial Farms with her husband Doug for 28 years, also teaching classes and workshops on gardening and garden design. She now focuses on garden design, consulting and teaching, and also works part-time in the Whitmire Wildflower Garden at Shaw Nature Reserve, emphasizing the use of native plants in home landscaping.
Native Plants