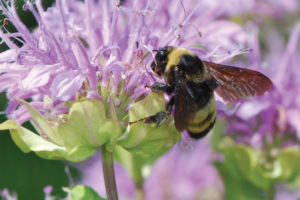 Following the remarkable success of Grow Native!’s “Monarch Café” lineup of tags that was released in spring of 2015, plans were set for the team to build upon the concept of purpose-driven landscape plants.

(This article first appeared in The Gateway Gardener April 2017 issue.)

Following the remarkable success of Grow Native!’s “Monarch Café” lineup of tags that was released in spring of 2015, plans were set for the team to build upon the concept of purpose-driven landscape plants. Gardeners across the country have been very aware of the decline of the honeybee and Monarch butterfly, but lesser known species of native beneficial insects have been overlooked by most media reports. A public relations campaign was conceptualized to help raise awareness about the plight of the pollinator and to help change the public’s relationship with the insect world. The idea of creating a new tag program of mindfully selected native plants that would serve as the first course of the “Pollinator Buffet” was born, and a team of experts was formed in early spring of 2015. Key collaborators that worked with the Grow Native! team included Ed Spevak (Curator of Invertebrates at the St. Louis Zoo), Dave Tylka (a biology professor at St. Louis Community College / Meramec and author of Native Landscaping for Wildlife and People), and Mike Arduser (retired Missouri Department of Conservation Naturalist).

The first focus in building the program was selecting key pollinators to feature. The cuckoo 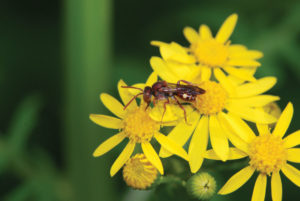 bee, featured on the golden groundsel (Packera obovata) tag, lays its eggs in other bees’ nests and is known to be an indicator of healthy bee populations. The leaf-cutter bee cuts small circular pieces of leaves and flowers to make their nests and can be seen as the featured pollinator of slender mountain mint 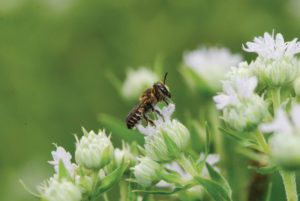 (Pycnanthemum tenuifolium). The featured species were chosen to serve as “ambassadors” of the insect world, meaning they are known as generally friendly and non-aggressive when unprovoked.

The second focus of the program was to ensure that bloom cycles of the chosen plants would cover as much of the foraging season as possible. Different pollinators can be most active at different times of the year and one of the most important foraging periods is in the fall when energy must be built up and reserved to survive the long winter season. If everything in the garden blooms at the same time in the spring and summer, like it magically does in the artist renderings in catalogs, the rest of the year will be barren. This can also ensure proper pollination in nearby edible gardens (your neighbor will certainly thank you for their late season bumper crop of tomatoes).

The last main focus of the program was to highlight plants that fit well into an urban environment and have a high aesthetic appeal when used and maintained properly. When incorporated into a thoughtful design, these plants can contribute to a living landscape with nice curb appeal especially when planted en masse. Pollinators are drawn to large groupings of like plants, so it is important to design in groups of 3 or more. For maintenance, it is recommended to stay on top of controlling the weeds in the area on a monthly basis and delaying cutting back dead foliage until March. It is best to leave foliage and debris throughout the yard in the fall to allow for winter insulation and protection for both the plants and some pollinators. One must also be aware of the usage of pesticides in the area, since many pesticides can be detrimental to pollinator health, especially when misused.

A successful pollinator garden is brimming with activity from March through the fall growing season. By engaging with these insects we can help build a relationship with them that will help create a brighter future for us all.