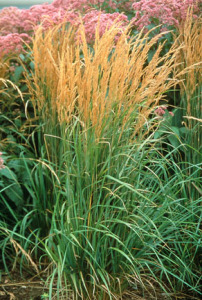 Graceful, yet sturdy and vigorous . . . multi-season appeal . . . a handsome variety of forms and sizes . . . ornamental grasses are all that and more. Their sword-like foliage sways to the slightest breeze. The feathery flower spikes crown the round clumps of grass blades.

Plant these in the spring for best results. For reasons that I have yet to understand, ornamental grasses do not reliably reestablish themselves if I have planted them in the fall. If the soil is of good texture and well draining, the plants should adapt quickly and thrive during the spring and summer months.

Do not add fertilizer, as an over-abundance of nitrogen will cause ornamental grasses to develop lush but weak foliage and be inclined to lop over. You can mix in compost to improve soil texture and this will provide all the nutrients the grasses need. A one- to two-inch layer of mulch around the base of the plants will conserve moisture, moderate soil temperature and help prevent weed growth —I use shredded hardwood bark mulch because it’s inexpensive and readily available.

Water the plants in thoroughly right after you plant them. For the first few weeks provide the equivalent of an inch of rain a week. After that, when the plants have reestablished well, you don’t have to water unless we have a bad drought. These ornamental grasses are about as near to being no-care plants as any I know.

Ornamental Grasses in the Garden

The ornamental grasses can play many roles in the landscape from ground cover to focal point, from hedge to screen, from patio planters to floral arrangements. Increasingly, garden designers are featuring ornamental grasses in containers. Just remember that unless the container is unusually large, the grasses will be hit hard by freeze-thaw cycles during our unpredictable winters.

Some gardeners cut back all perennials, including the perennial ornamental grasses, in the fall after the first hard frost. I prefer to wait until the first signs of growth in the spring because many of these clump grasses are attractive, even beautiful during winter months. The pennisetums and miscanthus varieties with their feathery flower heads stand up sturdily throughout winter storms. Prairie dropseed is a native grass is particularly lovely during the cold season as its delicate looking crown of seed heads that is deceivingly tough. If they should be knocked down, it’s easy enough to cut them back during the next warm spell. 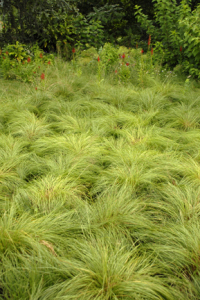 into a finely textured, dense mound about 15 inches tall. In color, this grass is a rich and glossy medium green. The mid- to late-summer flowers and seed heads open high above the foliage on slim stalks that may grow up to 30 inches in height. In the fall, this dropseed turns orange then fades to a pale tan in the winter.

The grasses of the Miscanthus genus number over 100 named cultivars and are often the first grasses that gardeners turn to. They vary greatly in size and are originally native mainly in eastern Asia. All are known for both their flowers and foliage, as well as for their fall color and winter beauty. The flowers appear in mid-summer to fall and are silvery plumes that become fluffy as they mature. In texture they range from fine to coarse and in height from three to nine feet. ‘Autumn Light’, an eight-foot grass with narrow green leaves, ‘Gracillimus’ with fine-textured foliage and a graceful rounded form up to seven feet tall, and ‘Morning Light’, with narrow foliage, rounded form and white-edged green foliage, are among the favorites of the Miscanthus grasses. 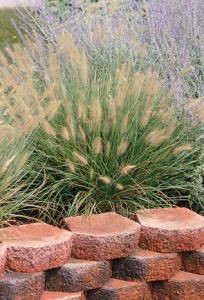 The fountain grasses of the genus Pennisetum are mostly perennial though a few tender tropicals must be treated as annuals in our climate. This group includes some 80 species and many named cultivars. They grow from less than a foot tall to over five feet. Aptly named, their multitudes of bristly flowers rise out of the mounds of foliage like a fountain. Pennisetum alopecuroides is a well-loved species that is perhaps best known for ‘Hameln’, a three-foot cultivar that has whitish flowers and makes a wonderful tall groundcover or border.

Widen your appreciation of ornamental grasses by getting to know the native bluestems and panicums. The prize-winning Calamagrostis x acuminate ‘Karl Foerster’ is another you might consider for your own garden—it’s a six-foot columnar grass, excellent for a narrow site, and blooms in June, earlier than most. Don’t forget the closely related sedges (Carex spp.), plants that are extremely versatile as a group. Some thrive on moist to wet soils, tolerate more shade than most grasses, and offer a wide variety of shapes, forms and sizes.