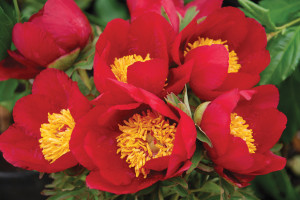 Among spring’s glories are peonies. The flowers are beautiful. The fragrance is spectacular. A plus in our region is that they are not eaten by deer.

Among spring’s glories are peonies. The flowers are beautiful. The fragrance is spectacular. A plus in our region is that they are not eaten by deer.

Years ago, we all grew herbaceous peonies, those that die back to the ground each winter like most perennials. They were and are glorious—and to top it off, they’re easy to grow. In China peony is the national flower and has been known since at least 1000 B.C. Peonies were brought to Europe in the middle ages and then to America in the mid-1800s. They fast became a garden favorite.

Although herbaceous peonies are known for their sun-loving characteristics, there also are 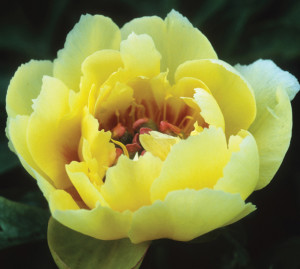 woodland herbaceous peonies, a separate species that will thrive in shade, where they get early spring sun before the leaves come out. Their delicate white flowers appear in early spring. Their lush foliage is handsome throughout the growing season and can create a wonderful ground cover.

Tree peonies, also with a long history in the Orient, are woody perennial shrubs. Slow-growing and long-lived, they eventually grow to three-to-seven feet tall and bloom earlier than herbaceous peonies. They are stately unusual plants and have huge flowers. The handsome foliage turns bronzy purple in the fall. The national flower of China, the tree peony is graced with hundreds of fragrant flowers in spring.

Cultivation of the Tree Peony in China dates to the seventh century. As a favorite subject of decorative design, they were known to the West through Chinese art and the descriptions of missionaries long before the flower itself was brought to Europe. Double forms arrived first in Kew gardens by the late eighteenth century and single forms followed by 1804. The British plant hunter Robert Fortune obtained thirty to forty varieties during his expedition to China sponsored by the Royal Horticultural Society in 1834. These varieties were evident in American gardens by the 1840s and 50s. Joseph Breck of Boston noted the availability of “several beautiful new specimens . . . introduced by Mr. Fortune direct from China” by mid century. 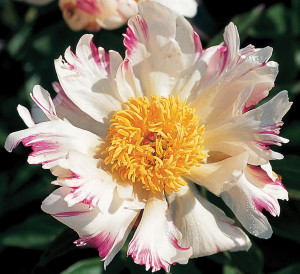 Wanting the best of both herbaceous and tree peonies, Japanese plant breeder Toichi Itoh began crossing the two. He made thousands of crosses that eventually resulted in the intersectional or Itoh peonies. Unfortunately, he died in 1956 before any of his new peonies matured. They were introduced in the late 1960s and, though they are pricy, they are wonderful specimens and swiftly growing in popularity.

Another worthy peony group includes the rock garden peonies. The smallest of peonies, they generally grow below 21 inches. Their flowers and foliage are in proportion to their smaller size. Some are fern-leafed—among my favorites—perfect for smaller gardens.

Peonies are hardy in USDA Zones 3 to 8. Full sun and well-draining fertile soil with neutral 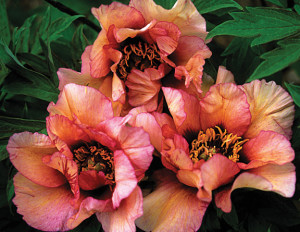 pH are the keys to growing peonies. Be sure that the eyes are no more than 1.5 to 2 inches below soil level. Once established they do not take well to transplanting. Containerized peonies can be planted at any time you can work the soil.

Clearly, your choice in peonies is large and varied. You would be wise to go to knowledgeable local nurseries or reputable mail order sources. Klehm’s Song Sparrow Perennial Farm (www.songsparrow.com), one of the most reputable of mail order sources, is a reliable source of all peonies, having grown peonies since the early 1900s.

Peonies, cut for indoor display are invariably accompanied by many small harmless but annoying ants. Avoid that by, first, upending and gently shaking peonies outdoors. If some ants remain, dip the flower in a pail of cool water and gently turn—repeat if some ants remain.