(This article was first published in The Gateway Gardener April 2006 issue.) 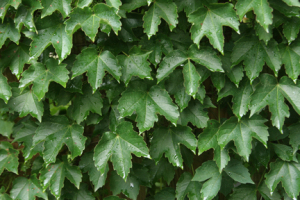 Perennial vines offer good solutions for many landscape design challenges. They can screen for privacy and they can hide an unsightly utility area. Vines can serve as attractive “walls” to separate different sections of your garden. When grown on an arbor, they can create a cool shady oasis. Vines can cover an ugly shed or camouflage an architectural feature that you dislike. Vines also can serve as groundcover on a steep slope. Perennial vines are too often forgotten as beautiful solutions to difficult gardening situations.

Some so-called climbers like climbing roses are really ascending shrubs that usually need to be tied to their supports. True vines climb by means of tendrils, by twining or by clinging. Tendril-type vines include grapes and their cousin, porcelain berry. They have string-like side shoots that wraparound and grasp their supports. The twining vines like big-flowered clematis and bittersweet wrap their stems around their supports with a vice-hard grip. Clinging vines like the ivies and trumpet vine climb by means of small aerial roots that cling to rough surfaces.

Tendril and twining climbers require supports such as arbors, trellises and wires. Perennial vines are long-lived so make the supports of sturdy materials. Use plastic, copper or aluminum rather than other metals because they won’t rust. Use woods such as cedar, redwood or cypress that are known to last longer under outdoor stress. Treat wooden structures with preservative to extend their lives even further.

Plant the clingers against stone or brick walls, not against wooden walls. They can damage wood by holding moisture under their aerial rootlets, causing it to rot. You can grow clinging vines against frame buildings if you grow them on trellises that are far enough away from the wooden wall to allow good air circulation. These trellises should be hinged so that they can be folded down when the wall needs painting.

If you buy bare-rooted perennial vines, for best results plant them early in the spring when they are still dormant. If they are in containers, you can plant them any time you can work the soil. Fertile, well-draining soil will result in vigorous vines. Train young plants in the pattern you want them to take. You may want to temporarily tie them to the supports with soft, removable ties such as soft strips of cloth.

Know what kind of exposure the perennial vines require. For instance, clematis should have its foliage and vines in full sun, but its roots shaded for best results. Virginia creeper, on the other hand, will grow very well in quite a bit of shade. If vines are not growing well, feed them in early spring—I like a balanced slow-release fertilizer. An old saying that is true about many vines is: The first year they sleep, the second year they creep and the third year they leap.

A Sampling of Perennial Vines

To get you started on designing with perennial vines, here are a few of the better-known vines. These have proven themselves over and over in our demanding St. Louis climate.

Trumpet Creeper (Campsis radicans). A robust native, this vine can reach a height of 25 to 40 feet, climbing strongly with both twining stems and aerial rootlets. This is a rangy plant with summer flowers of orange red. There are some yellow varieties, too.

Clematis (Clematis sp.). The queen of the vines is large-flowered clematis, twining 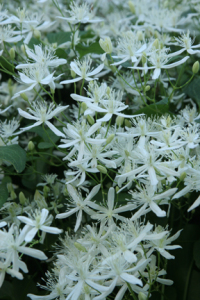 plants, growing up to 8 to 10 feet, in a wide range of species and cultivars so that you could have bloom from early spring to frost with careful planning. Full sun to partial shade, a loamy, well-draining soil with a pH of 6.5 to 7.0 and constant soil moisture are the main requirements. As I said before, hot heads and cool feet will suit these beautiful vines. The sweet autumn clematis (C. paniculata) grows 20 to 30 feet and bears masses of sweet-scented, cream-colored flowers in the fall.

English Ivy (Hedera helix). This familiar and handsome evergreen vine grows 20 to 50 feet clings to rough surfaces and prefers shady locations with highly organic, moist soil. It comes in a number of very hardy varieties, ‘Baltica’ and ‘Bulgaria’ among them. 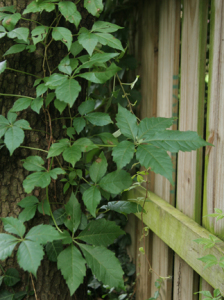 Boston Ivy (Parthenocissus tricuspidata) & Virginia Creeper (P. quinquefolia). Both of these clinging vines have sensational crimson color in the fall and both are vigorous growers, ideal for fast coverage of masonry or brick buildings. Both are tolerant of a variety of soils and will grow well in sun or shade. Virginia creeper, much prized by English gardeners, is a native here.

Silver Fleece Flower (Polygonum aubertii). Also called silver-lace or silver fleece vine, this twining plant flowers abundantly in August and September with clusters of small white or greenish-white flowers that last a long time. An enthusiastic grower, it may attain 20 feet in one season. Full sun is needed but just about any soil will do. The bright-green foliage is dense and should have severe pruning in the spring to keep it from springing out of its chosen site.

These are just a few of many fine perennial vines. Climbing hydrangea, grape, wintercreeper euonymus, wisteria, Dutchman’s pipe and hardy kiwi are a few of the others that you might consider.