The Diverse World of Geraniums 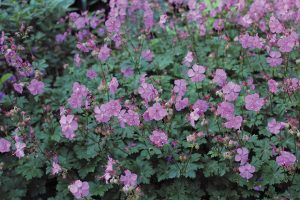 Did you know Pelargoniums and Geraniums are two different plants? Geranium refers to the genus of hardy perennials that is commonly called cranesbill. One of my highest recommended perennials; it always seems that a cranesbill can fit into just about any planting.

[This article was first published in The Gateway Gardener March 2020.]

Did you know Pelargoniums and Geraniums are two different plants? Geranium refers to the genus of hardy perennials that is commonly called cranesbill. One of my highest recommended perennials; it always seems that a cranesbill can fit into just about any planting. The genus Pelargonium names the classic geraniums that have been a staple bedding annual for hundreds of years. Being one of the most prolific annuals in the United States, their fire-truck red flowers are as recognizable as apple pie and are just as popular. But Pelargonium expands much further than this classic. The lesser-known varieties, with their exotic colors and scents offer unique opportunities for the gardener. 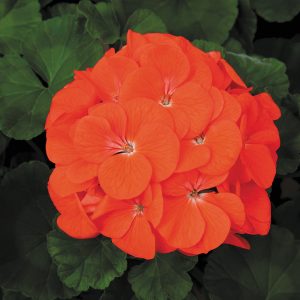 Newer varieties of the annual geraniums boast larger flowers and longer bloom times with less need to deadhead. Two of my new favorites, ‘Galaxy Violet’ and ‘Maverick Orange’, both claim giant long blooming neon flowers. I still am partial to some of the heirloom brocade geraniums, which are known more for their exciting foliage, though their flowers are no shrinking violets. Brocade geraniums were popularized in the Victorian era when often wealthy homes contained a greenhouse. ‘Mrs. Pollock’ may be one of the showiest from that era persisting today, and I personally have to grow ‘Persian Queen’ every year.

If you want your nose to be wowed, try scented geraniums, which come in many different scents from lime to chocolate. ‘Attar of Roses’ has taken my heart and once you have tried a rose geranium cake or ice cream you too may feel that love. Contrary to popular belief, the scented geranium known as ‘Citronelle’ has not been proven to work as a mosquito repellent. The true citronella plant is a type of lemon grass.

Tender geraniums excel in mixed containers, as bedding plants, or used in the herb garden. They may be overwintered indoors.

Hardy Geraniums, or cranesbill, are among the easiest to grow perennials, with many having the following amazing traits: require little extra care once established; evergreen foliage; form into a dense weed-blocking patch; tolerate sun or shade; deer and rabbits almost never touch them; and are incredibly long-lived. See why I can’t recommend them enough? 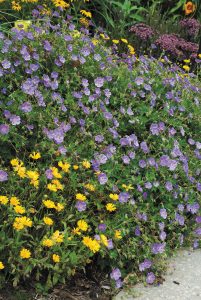 ‘Rozanne’, the 2008 Perennial Plant Association’s Perennial Plant of the Year, is one of the most recognizable perennials around with good reason. In summer large violet blooms appear and, as long as it keeps getting water, will continue to flower for months. This vigorous sprawling plant can grow to about 18” tall and 2’wide, covering a lot of ground.

The 2015 PPA’s Perennial Plant of the Year, ‘Biokovo’, blooms late spring into summer with sweet white flowers and pink stamens, creating a dainty effect. While the flowering is gorgeous enough on its own, the foliage and form really shine. Growing only about 6” tall, ‘Biokovo’ grows into a low mat of deep green foliage that can take some light foot traffic. This dense foliage turns brilliant maroon in fall that persists all winter until new foliage emerges in spring, covering up the old. ‘Biokovo’ has a sister plant by the name of ‘Biokovo Karmina’ which is almost identical save for its bright lilac flowers. 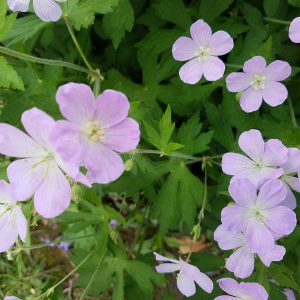 All geraniums, whether hardy or not, feature spicy scented foliage that becomes more intense when broken or rubbed against. All are passed over by deer and bunnies and thrive in average well-drained soils, but can tolerate less water if needed. When planning your next garden or container think about adding in some of these effortless plants.

Abby Lapides is owner and a speaker at Sugar Creek Gardens Nursery in Kirkwood, Missouri. She has degrees from the University of Missouri, and is a member of the Landscape and Nursery Association of Greater St. Louis.