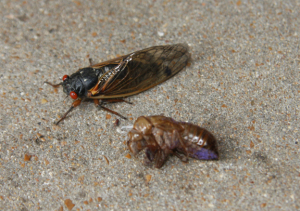 On May 18th, my son Chris sent me a photo by phone of a bunch of pencil- or finger-sized holes that had appeared overnight in the soil in his Crestwood backyard. “What’s going on?” he asked in a mild panic. I knew from calls we’d received at the Missouri Botanical Garden Horticulture Answer Desk and from reports in the news that the 13-year cicadas were expected this spring. It seems they were beginning to emerge in his area. The next day I dropped by his house to take photos of the holes, and indeed, there were cicadas everywhere! On the trees, on the floor of the carport, on the cars themselves. The periodical cicadas had arrived!As of this writing, according to Chip Tynan of Missouri Botanical Garden, most reports have come from South and West Counties. He said first reports were received on May 13th, then the weather cooled and so did the cicadas until now.

Periodical cicadas are common in most of the eastern US, coming in both 13- and 17-year varieties, and according to a map I saw on the news the other night, Missouri seems to be Ground Zero for the 13-year cicadas this year. Upon emergence, males will climb into the trees, and within 2-4 days start their “singing”  to attract females. This caterwauling can go on for up to 6 weeks, beginning at dawn and getting louder as the day heats up, and in concert with its innumerable neighbors (more than 1.5 million  per acre, according to a recent St. Louis Post-Dispatch article), can drown out conversation and make life outdoors in late May/early June nearly unbearable from dawn to dusk. 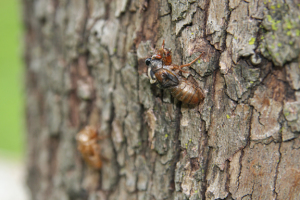 A 13-year cicada shedding its exoskeleton

Meanwhile, the females are the ones that can do damage to our trees. After mating, they slit the bark of twigs and small branches of trees with a sawlike ovipositor, and insert eggs 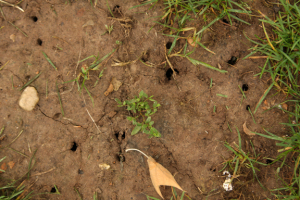 Cicada emergence holes in the soil

into the pocket formed in the wood, then move down the twig and repeat the process over and over, laying hundreds of eggs.  In 4-6 weeks, these eggs hatch into nymphs that drop to the ground and burrow in, feeding on sap from plant roots and going through several molt stages until, 13-years later, they emerge from their underground homes again.

The slits made in the bark by the females can damage branches, causing leaves along the twigs to wither and die. While this damage is hardly noticed in a mature tree, it can be serious to  recently planted younger trees. Young trees can be covered with cheesecloth, mosquito netting or tulle fabric, and must be completely secured at the trunk of the tree to prevent the female from accessing the branches. Missouri Extension also says bands of sticky adhesive or burlap strips wrapped around the base of the trunk will trap emerging nymphs as they crawl up the tree, which can then be hand-picked in the morning. Finally, carbaryl can be applied to young trees every 7 days during the egg-laying period.

If you see damage to trees, Missouri Extension recommends pruning out and destroying young twigs within 4-6 weeks to prevent the new generation from hatching and returning to your soil. If planting new trees, you should consider delaying until fall or next spring.

Oh, and just about the time these guys are done for the year, the annual (dog-day) cicadas will make their summertime appearance! It’s going to be a buzzy summer!