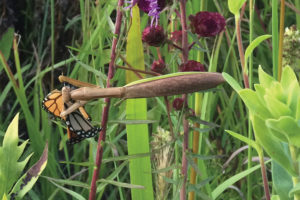 Praying mantids have long been subjects of intrigue in the garden. Their discrete lurking and ability to blend into their surroundings, along with their huge eyes and turret head…

[This article was first published in the September 2019 issue of The Gateway Gardener.]

Praying mantids have long been subjects of intrigue in the garden. Their discrete lurking and ability to blend into their surroundings, along with their huge eyes and turret head that keep a curious watch on human visitors make them objects of wonder and endearment to young and old. Plus gardeners have appreciated their believed role as “beneficial insects” controlling less desirable insect pests without the use of pesticides. However, among the many species of mantids, not all may be as welcome in the garden as many have thought.

Of the many species of mantids existing, the most likely to be found in our area are the native Carolina mantis (Stagmomantis Carolina), European mantis (Mantis religiosa) and Chinese mantis (Tenodera sinensis). All are non-selective ambush predators, praying on beneficial as well as pest insects. Of these the Chinese mantis is the largest, at 3-5” in maturity, and becoming a growing concern to some naturalists and gardeners.

When educators order mantid egg casings for science projects, or gardeners buy beneficial mantids to release into their garden, the species they most often receive is the Chinese mantis. This–and the fact that, as the largest of the 3 common mantids, it easily outcompetes the others, not only by outhunting them, but sometimes by eating them–has given the Chinese mantis population dominance in gardens and natural habitats, and possibly contributing to declining native mantid populations.

And because of their size, they may not bother with the smaller insects like aphids that are the pests in most of our gardens, but take on the bigger meals, including the butterflies and bees many of us work to attract to the garden. They are even quite capable of ambushing small birds like hummingbirds.

Though it may not be easy for gardeners to tell them apart, native mantids are generally much smaller, 2-3”, and is usually a mottled green or brown. European mantids are slightly larger at 3”, and typically pale green, and the Chinese mantids are usually green to light brown.

Gateway Gardener reader Mark Peters has documented the bloody trail of the Chinese mantis in his own 6-acre prairie in Jefferson County, and is making it a personal mission to educate others about Chinese mantids. “A few years ago, I surveyed the prairie and killed 701 of them! In just an hour or two, I picked up (dozens of) monarch wings under blooming plants where the mantids perched.” 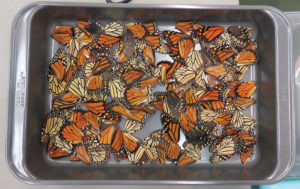 James Trager, entymologist and retired educator at Shaw Nature Reserve, opines that , while the practice of introducing Chinese mantids by students or gardeners or ceasing to do so will probably will have minimal effect on existing populations ability to thrive, as a general practice, he would not encourage introducing non-native predators of any kind in an attempt to control pest species.

The takeaway, then, is Chinese mantids are likely here to stay, but if teachers can procure native mantids for their science projects and gardeners can find other means of controlling—or living with—insects in their gardens, the monarchs, bees and hummingbirds would probably thank you.