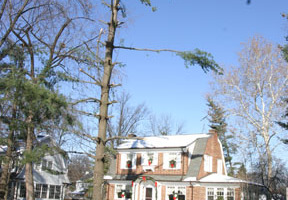 (This article was first published in the March 2007 issue of The Gateway Gardener.) 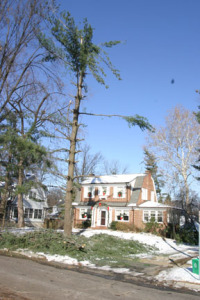 It's not too difficult to see the damage this white pine incurred in a December 2006 ice storm.

Regardless of the theory explaining our mild winters, the trend is pretty clear – it’s warming up on average.  The data are now shown in the new plant hardiness map issued by the Arbor Day Foundation challenging the old USDA map with St. Louis on the transition line of growing zones 5/6 (0 to -20F).  We are now a solid zone 6 (0 to -10 F).  While this helps to clarify plant selection from the climate point of view, the day-to-day concern is with the seasonal fluctuation of temperatures, precipitation and wind that make for plant problems.  Ice storms alone have cost us dearly, but we are not out of the woods, as the effects will continue to show up in various ways.

There are three common seasonal plant problems associated with winter weather; extended mild temperatures in the fall, ice and wind or heavy snow, and spring freeze/thaw effects.  All of these separate events can cause damage to plants that may show up later in the late spring to early or mid-summer. 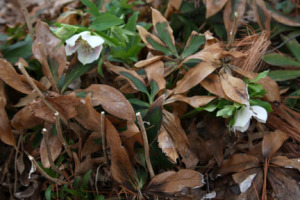 Winter's cold has ravaged these hellebore leaves, but it can simply be pruned away to reveal the healthy foliage and new blooms.

weather in autumn delays dormancy, then is followed by a significant drop in temperature (30 to 40 degrees).  Year to year, we find this anywhere from October to early December.  The evergreen shrubs like rhododendron, boxwood and yews are likely candidates for damage.  It’s easy to see in the spring, especially on pruned evergreen hedges and fall planted evergreens like arborvitae – white, bleached foliage dotting the plant.  This is not a significant problem normally.  Just give it a good wait to make sure that the growth is dead before pruning it out.  Some bleached foliage on evergreens may come out of it.

Ice damage is another story.  The lesson here is “keep up with your tree care”.  Ice accumulation brings great weight to branches – especially evergreen trees like white pine, grand and sweetbay magnolia.  These plants offer an extra amount of surface area for collection of frozen water.  Add in a little wind and you have ice loads that exceed the branch resistance.  Even deciduous trees and shrubs with upright branching (narrow crotch angles) can be blown apart by the ice loads.  Preventatively, there is nothing to be done for evergreen trees.  For those damaged, trimming and replanting assessment is it.  With deciduous trees, the damage is controlled by seasonal pruning that takes into account removal of weak and internally decayed branches.  If you have not managed your trees, put it in the plan.  Also, keep looking up.  Many hangy-dangy branches are still up there and will come down.  Of course, branch removal over power lines is a must – pay me now or pay me later.  Some shrubs were victims too – many Foster hollies, junipers and arborvitae were pressed to the ground.  The advice here is to wait for a couple days of warm weather, work the root system back into the ground and tie them up to a stake or fence using cloth strap or pieces of hose.  Maintain this until early summer when some evidence for re-rooting is there.  A mulch layer will help. 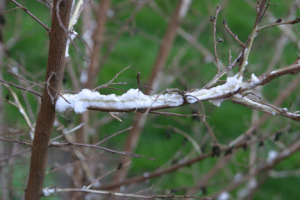 Almost every year we have golfing weather in January that speeds the bulb emergence and the foliage burns back with the onset of freezing temperatures.  Bulbs are use to it and flower performance is mostly not affected.  Spring problems are most impressive when the early warming is followed by a plummet of cold into the minus category.  Activation of sap movement, emergence of leaves and flowers signal susceptibility.  Species that remain dormant, flower later and are slow to emerge, fair best.  You might think about this when selecting you next flowering tree.  Damage including dieback of branches, frost tattered leaves and frozen flower buds will show up eventually.  Be patient, let nature recover and keep the pruners sharp.

Steven Cline, Ph.D., is the director of The Kemper Ceter for Home Gardening at Missouri Botanical Garden.