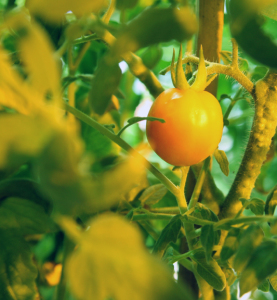 Last summer was a disaster in the vegetable garden, leaving me still longing for the taste of fresh, homegrown veggies. So I’m going to try growing some of my favorites indoors. Lettuce shouldn’t be too difficult, but I suspect tomatoes are going to be more of a challenge. Here’s what I’ve learned so far.

Certain crops should be relatively easy to grow indoors, including leafy vegetables like lettuce and spinach. They’re smaller plants for one thing, and will tolerate the cooler temperatures of my basement environment. Many herbs, too, are excellent choices for growing indoors (those grown for their leaves, such as basil, oregano and parsley, rather than seeds or flowers are your best choices). Tomatoes and peppers may be another matter. Anything that requires flowering is going to require more light and heat, thus a greater upfront investment in equipment and ongoing investment in electricity.

That said, it can be done. For growing tomatoes indoors, most recommendations suggest crack-resistant varieties, and varieties specifically cultivated to produce smaller plants that require less water, less soil and less space. Some examples include Micro Tom, Orange Pixie, Patio, Tiny Tim, Small Fry, Red Robin—all being cherry types. Most peppers can also be grown under the same conditions as tomatoes, as well as cucumbers—if you have the room!

Leafy vegetables and herbs can be grown in small 4” pots. For the above-listed tomato varieties you may be able to get away with a 1-2-gallon container, but for larger plants, a 5-gallon container is necessary to give roots room to grow. Use a soilless potting mix such as Espoma or Fertilome for necessary drainage and aeration.

Unless you took cuttings from your plants or brought potted plants indoors, you’ll probably have to grow your plants from seeds. Herbs may be the exception as many garden centers—even the supermarket—carry a selection of herb starter plants to grow indoors in the winter.

For seed starting read the instructions on the seed packet. In general, you can start seeds in just about anything—paper cups, egg cartons, nursery starter trays, or homemade cups using newspapers (Google it). Just fill the containers with a soilless starting mix, moisten, plant the seeds at the depth recommended on the seed packet, cover the soil with plastic to keep it from drying out, and place in a warm window or even on top of the refrigerator. They don’t need light to germinate. After they start to germinate, remove the plastic, and place in a sunny location or under grow lights (see lighting instructions below). Once seedlings reach a couple inches and have 2-3 sets of true leaves, transplant them in their own containers.

This is the most complicated  component to growing veggies indoors. Some things can be grown in a sunny window, others require a little help, while still others may require the big guns to successfully flower and produce fruit. And that is typically the dividing line. Most leafy vegetables and herbs grown for their leaves can get by with lower quality light than those that will need energy to produce flowers and fruit. You can even grow tomatoes to a pretty good height under simple fluorescent grow lights—but you may never see flowers, or at best, sporatic flowering and poor fruit production. So here’s a quick introduction to lights and the ones that might be right for the crop you’re growing.

When comparing lights, you need to consider their output in two terms—color and intensity. Plants respond in certain ways to certain color spectrums. Of course daylight has it all, but artificial lighting sometimes only provides a limited spectrum, and varying degree of intensity.  Once again, leafy veggies and herbs will do fine with less intense lighting, while anything larger than 12” will require a little more “oomph!” For the cooler lights (fluorescents and LED) keep the light source about 4″ above the top of the plant. Others will have to be at a greater distance away to prevent frying the plants. Here’s a quick rundown the options I found visiting a couple local sources, Worms Way in Olivette and Green Thumb Organics in St. Peters.

Fluorescent lighting has several advantages in that it’s relatively inexpensive, uses less electricity than incandescent and some other options, and lasts much longer than simple incandescent bulbs. It also burns cooler so doesn’t require venting as do some lighting choices.

Standard shop lights (T-12) are the least expensive option, and bulbs can be purchased in “cool white” and “warm white” and mixed to achieve a virtual full spectrum of lighting color. These will be fine for starting seeds, growing seedlings and leafy plants and herbs up to 12” in height.

High Output (HO) T-5 fluorescents produce about twice as much light as standard fluorescents, and come in a variety of tube lengths, and configurations from 2-8-tube units.  With these units and a reflecting hood you can probably get your tomatoes and peppers to flower-producing size, but according to experts I spoke with at Green Thumb Organics, they may lack the power for healthy, vigorous flowering and fruiting. These units are more expensive than the T-12 shop lights, but less expensive than some other options, especially since they don’t require cooling fans and venting systems.

Jason at Green Thumb Organics also told me about a relatively new “Feliz” brand compact fluorescent. Similar in appearance to the new low-energy fluorescent bulbs—yet much larger—they give much the same light intensity and color as the T-5 lights, but in a more compact, focused system. They’re fairly expensive, but cheaper and burn cooler and more efficiently than high intensity lamps like metal halide and high pressure sodium (see below). 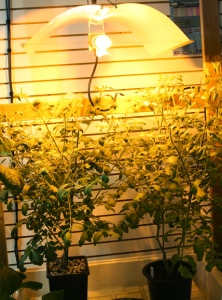 All the above are great for the small leafies, but if you really want a healthy, abundant crop of tomatoes or peppers, my research leads to the HID choices. There are two options, and you’ll need them both to set fruit on your tomatoes and peppers.  You’ll recognize Metal Halide Lights as the “white” streetlamps you see around your neighborhood. The color spectrum provided by these lamps replicates the spring light that promotes vegetative growth. You can also use these for the leafy veggies, but it’s overkill with energy consumption, and you have to keep them away from the leaves or the heat will fry them. High Pressure Sodium lights—the “yellow” lights you typically see in parking lots—provide the warmer colors of late summer/fall, and promote flowering and fruit set.  Both these HID versions come in a range of wattage options, from 400-1,000, and require hoods with ballasts. Some will also require ductwork and ventilation equipment. Simple systems can begin around $400-500 and run up to $1,000 or more.  Both Worms Way and Green Thumb Organics carry all these options. 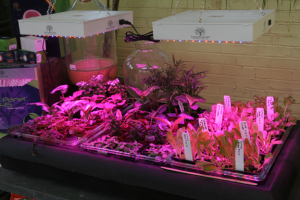 LED grow lights (Light Emitting Diodes) are an emerging option. They use even less energy than fluorescent lights, last longer, and provide the full color spectrum range so you can use the same light to grow from seed all the way through fruiting. I’m told they’re especially popular with growers of certain, um, “medicinal crops” because they don’t produce electric spikes or telltale heat profiles that law enforcement sometimes look for as clues for such activity. We’re not promoting it—just reporting what was told to me! We saw a small unit at Bowood Farms in the Central West End large enough to produce a small tabletop of crops. Again, somewhat expensive, but last a long time. Larger units may be needed for tomatoes.

Watering is pretty basic. Just keep the soil moist but not saturated. Water when the soil is dry to the touch at the surface.  As with outdoor care, watering of tomatoes and peppers should be consistent, not letting the soil dry especially after fruit set, in order to prevent blossom end rot. Fertilize as recommended on the label with organic fertilizers like Espoma, or synthetic fertilizers like Schultz or Fertilome. Start with a formula for vegetative growth that is high in nitrogen, then as the plants near flowering stage, switch to a flowering/fruiting formula lower in nitrogen and higher in potassium.

You don’t need to worry about this step with your leafy vegetables, but 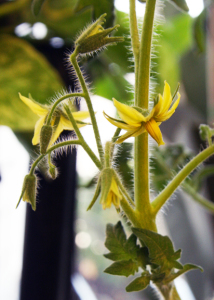 tomatoes and peppers will need you to step in as the surrogate pollinator. With peppers, it’s a rather simple process of taking a cotton swab or small paint brush and dabbling around in each flower, taking pollen from one to another throughout the plant. Tomatoes are a little more reluctant to give up the goods. In nature they rely on the vibrations of the bumble bee or similar hyper-energetic visitor. To simulate this, take an electric toothbrush or other vibrating implement (I’m not passing judgment) to the main branch and side stems. In the absence of a tool, simply flick the stems gently. You should be able to see the flowers releasing the pollen as you do so. There’s no need to attempt to transfer pollen from one flower to another. Each flower is self pollinating.

Having researched all my lighting options and balanced them against my budget (and since I DID finally get a fair crop of late season tomatoes and so am not quite as starved for them as I was when I first started thinking about this in late summer), I’ve decided to see what I can do with the T-12 fluorescents, since I already have several shop light fixtures, focusing on salad greens and herbs this winter, while experimenting with a couple of tomato plants I took as cuttings from the summer garden. Then I may graduate to a more sophisticated system next year.

Another option is to use the T-12 lights to get tomatoes and peppers started, then switch to the less economical but more productive HID lights for the flowering and fruiting stages.

Robert Weaver is editor of The Gateway Gardener, a monthly gardening publication in the St. Louis, MO, area. He’s also a Master Gardener, has a horticulture degree from St. Louis Community Colleges-Meramec, and has been a garden writer for more than 20 years. Despite all that, this is his first experiment growing veggies indoors.