(This article first appeared in The Gateway Gardener January/February 2006 issue.)

It’s a question I am asked several times a week.  “Do I really need to prune my tree?  Don’t trees prune themselves?” The answers, of course, are a definite yes and a qualified yes.  Trees that grow in mowed or manicured places definitely need some type of maintenance on a regular basis, and pruning is the most common and most beneficial activity.  Trees in woodlands and less traveled places will prune themselves, but it’s usually not a pretty site.  On some species, dead limbs may persist for years until decay and gravity work to bring the limb down.   Neglected trees with large dead limbs are not only unhealthy, they are dangerous and need attention.

There are several reasons to remove limbs from a tree.  However, it is absolutely essential to understand that each pruning cut is permanent and will change the way a tree grows. 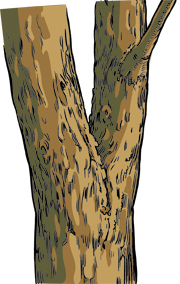 Co-dominant stems. The nearly equal diameters can make them more prone to failure.

growth.  Too often, I see trees with a main trunk that divides at about five or six feet above ground and grows as a “double-trunk” or “multi-trunk” tree.  As the tree grows in size, these two “trunks” compete and will actually push against each other.  Once they become large enough and the competing pressure increases, a load of snow or a stiff breeze will cause the tree to split apart.  This can have disastrous impacts if the tree has grown to a large size before its collapse.  Recognizing these competing stems at a young age, and pruning one of them away, will create a structurally sound tree that will resist failure.

Pruning young trees also allows you to increase the space between limbs along the main trunk.  With adequate room, these limbs can form a strong union with the trunk and reduce the chance of limb failure in the future.  The goal is to establish a strong trunk with sturdy, well-spaced branches.

Pruning older trees typically involves the removal of weak or dead limbs, crowded or rubbing limbs, and to eliminate hazards.   This type of pruning is often called “crown cleaning”.   Don’t think of it as thinning.  Trees actually benefit from a full canopy of healthy leaves on strong limbs.  A tree’s energy supply comes from the sugars produced in healthy leaves.   Pruning just for the sake of “thinning the tree” does not improve its health.   Remember, that every pruning cut is permanent and will change the way a tree grows.   Main factors to consider are the safety of your property and the health of the tree.  If one of these two factors is not addressed, don’t prune. 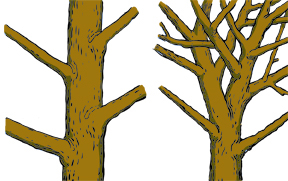 Branches should be well spaced radially and around the trunk.

I’ve used the term “cleaning” to describe removal of limbs in the canopy of a tree.  Another common term is “raising”.   This refers to removing low limbs that may be a clearance problem for walkers or vehicles.  Removing low limbs will raise the clearance height and may also remove limbs made weak from too much shade from overhead limbs.   Some homeowners will prune limbs that interfere with the house or other trees.  Pruning away “offending” limbs is a legitimate reason to prune, just be sure you keep in mind the impact on the tree you are going to prune.

No article on pruning would be complete without mentioning the “T” word.  I am convinced that the green industry and others have done a wonderful job of educating those that are teachable about the horrible effects of “topping”.  Unfortunately, we still see freshly topped trees almost every day.

There are many tree services, with very professional looking crews and equipment that will still “top” your tree.   Turn them away if they offer this service!  Tree lovers will celebrate when this practice of removing large limbs down to stubs along the trunk has ended.  Topped trees usually look like a hatrack.

While topping may temporarily remove limbs that have obnoxious fruit (sweetgums), or grow quickly (silver maple), it will create large wounds that begin to decay and it robs the tree of essential sugars produced by a full canopy of leaves.  Topped trees will struggle to grow and survive by creating a quick flush of new growth that forms poorly attached limbs and adds additional stress to the original limbs.  The tree is back to its original size within one or two growing seasons and is a strong candidate for storm damage.  Once a tree is topped it is doomed to a miserable existence that will torment its owner until it finally falls apart during a snowstorm or high winds.

A homeowner should only consider pruning limbs that can be safely reached from the ground (even with a pole saw).  If you have to use a ladder, call a professional!  I have too many horror stories to share about well intentioned, though untrained, folks that have permanent injuries from falling out of a tree or off of a ladder.

The best advice I can give a homeowner is to hire only tree service companies that employ certified arborists. Certified arborists meet a list of criteria developed by the International Society of Arboriculture and have shown a desire to exhibit their higher level of competence.  Certification is not the same as a license, but it does offer some level of measuring an arborist’s professionalism.

If you want to tackle the pruning yourself (remember…from the ground only!!), there are a few basics to remember.  Nearly all pruning can be accomplished with hand-tools.  Chain saws are only needed for the larger branches or to remove a tree.  A set of scissor type hand pruning shears is better than the cheaper anvil type of shear.  Pruning saws typically have a small downward curve that makes cutting on pull-stroke a breeze.  Some can be mounted at the end of an extension pole to help you reach eight to twelve feet or more.  (See? No ladders!!)   Invest in good tools and keep them sharp.  It makes a difference! 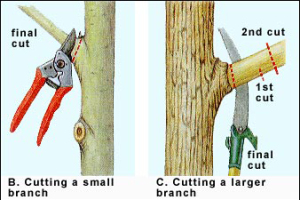 right limb.   Pruning cuts should be made in a way that leaves a small bump, but not a stub.  The bump is known as the “branch collar” and is visible before you make the cut.  Look for a raised or swollen area at the base of a limb where it joins the trunk or parent limb.

For larger limbs, you may want to use the 3-cut method.  First, make an “undercut” several inches from the base of the limb.  This cut should only go one-third to one-half through the limb.  The second cut removes the limb by cutting from above to meet the first cut.  This will leave a short stub that is still attached to the parent limb.  Remove this by making a carefully placed cut that retains the branch collar.  (Remove the “stub” but leave “bump”.)

This method will reduce the chance of a limb tearing away bark if only one cut is used.  It also allows perfect placement of the last cut since only a small piece is left to remove.  This cut is the permanent scar that the tree now has to try and cover up over the next few growing seasons.   Experts have discovered that the once common practice of applying wound dressing actually has no benefit.  It may actually seal in the spores of wood rotting fungi and create an environment that promotes decay.  New times and new ideas are here.

While the question about “should I prune” is still the most popular, the second most popular is “when do I prune?”   I always tell folks that when the saw is sharp and your back is strong you can prune.  There are a few rules and exceptions.  (Science gets in the way.)  Avoid pruning oaks during the period April – June.  Fresh pruning cuts can increase the chance of infection by a deadly disease known as oak wilt. Oak wilt spreads rapidly in the springtime and becomes less active in the summer heat.

There are also several rules about seasonal pruning.  While it is best to prune most trees when it is dormant (winter), we would likely never get any pruning accomplished if we waited for a chilly day with a brisk wind.  Early spring pruning may cause some trees to “bleed” a bit (maples).  This is rarely a complication and shouldn’t interfere with your desire to get some pruning accomplished.

Lastly, it’s a good idea to avoid pruning just after the spring flush of new leaves has occurred.  It takes a lot of energy for a tree to grow a full set of leaves.   Even though trees look full and vibrant at that time of year, they are relatively weak until the leaves really kick in and begin to produce the needed sugars.  A large amount of pruning may stress a tree at this vulnerable time.  Never remove more than 25% of a tree’s canopy over a few years.  Over pruning can create an imbalance in the amount of limbs and roots.  It can also promote an abundance of sucker growth on the remaining limbs.

For more great information about pruning trees you can visit the web sites listed below.  To prune or not to prune….that is the question.  Or should it be… how do I prune?