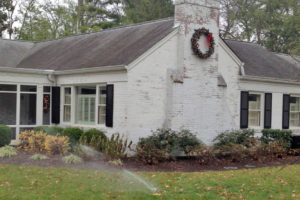 Residential and commercial landscape professionals as well as commercial growers of turf, trees, shrubs and perennials are seeing signs of drought stress and advising homeowners and commercial landscape property managers to take advantage of warm days and get supplemental water to their landscape plants, according to the Missouri Green Industry Alliance (MoGIA), a group representing professionals in the industry. The concern is compounded, they say, by the extremely mild fall season of 2017, and the opportunity it provided for extended fall planting of vulnerable new landscape shrubs, trees and turf grass, as well as perennials and groundcovers.

According to Patrick Guinan, Extension/State Climatologist for the University of Missouri, despite the cold spell of late December, 2017, will likely rank as Missouri’s 6th warmest year on record.  The first 4-months of 2017 were unusually mild, and we also experienced a warm fall. The warmth of 2017 outweighed the cold by far.

Additionally, Guinan noted, 2017, will likely produce the driest November-December period in nearly 3 decades, or since 1989. Preliminary precipitation data indicate the statewide Nov.-Dec. average this year is just under 2 inches. In 1989, the Nov.-Dec. average was 1.28 inches. The statewide average precipitation for the Sept.-Dec. period this year was 6.5 inches, less than half the average. This year was also the driest Sept.-Dec. period since 1989. In 1989, the Sept.-Dec. average was 6.27 inches.

By the end of 2017, abnormal dryness to extreme drought was impacting nearly all of Missouri, according to the U.S. Drought Monitor, http://droughtmonitor.unl.edu.

That extended warm weather of the fall was a welcomed invitation by homeowners and commercial and residential landscape installers to plant more plants. Vic Jost, proprietor of Jost Greenhouses, a wholesale grower of herbaceous perennials and woody trees and shrubs in the St. Louis area, is particularly concerned about the projected well being of the volume of plants installed during this time.

“Many plants installed this fall, along with established plants in the landscape, were already under heavy stress due to our local drought conditions,” said Jost.  “Add to that the extreme cold temperatures we have experienced, and we’ll likely see severe damage in many plants, both evergreen and deciduous, where irrigation was shut off early in the fall. When given the chance this winter, during any periods of temperature warm ups, I would recommend taking the time and getting water to the landscape.”

Dan Christie, President, Metropolitan Forestry Services, a professional tree care service company in Ballwin, MO, concurs. “In over 40 years in the business, I can’t remember witnessing a late summer, fall and early winter drought such as we are currently experiencing.  My concern is that an extensive amount of our plant material is not going to pull though due to the stress the drought is placing on the root system as the trees and shrubs were going into dormancy.”

Matt Keeven, owner and manager of Emerald View Turf Farms, a commercial grower of turf grass sod in O’Fallon, Misssouri, notes the drought issue, and also sees a related concern as the drought affects nutrition. “The extended warm temperatures into late fall has allowed lawns to continue feeding using stored nutrients, while the drought has caused desiccation in most fescue, bluegrass and zoysia lawns. Moving forward to the spring of 2018, it will be critical to feed our fescue and bluegrass lawns early (Mid-February) to ensure proper nutrition for root development and spring green up.”

Mike Rood, arborist, nurseryman and owner of his family’s Pea Ridge Forest nursery near Hermann, Missouri, says “Extreme dry and cold temperatures in the fall and winter months quickly stress plants leading to an unnatural susceptibility to insects, disease and possible premature death. The greatest concern would be 2017 plantings, as well as conifers and broadleaf evergreens. To mitigate problems, we are irrigating later than ever. Homeowners are encouraged to drag out the hoses and start watering.”

Victoria Hatfield, principle and owner of Wallflower Design, a landscape design, install and maintenance business serving homeowners in the St. Louis region, sent a note to customers in December, expressing many of the concerns mentioned above. “In addition, the low angle of the sun and gustier winds may result in even dryer soils than normal. The new plants outside do need water/moisture during the dormant season, and most do not want their roots to “dry freeze.” (When ground that has sufficient moisture freezes, the minimum temperature of the soil will generally not fall below the freezing point of water, 32 degrees. When the soil is dry, however, the soil temps can drop to near the ambient air temperature, causing further root damage or death.) The memo went on to advise hand watering when air temperatures are above 40 degrees F, applying mid-day to soak in before possible freezing at night.

Since most landscape irrigation systems are shut off for the winter season, application of water during the winter months is a bit more challenging, requiring the use of water obtained from freeze proof water outlets.

How can you tell if your plants need watering. Put a rain gauge or container of some sort outside and measure the amount of rain accumulated. If they don’t receive 1” of water per week, supplement to achieve that goal using a hose or watering can.

Finally, of course, a warning is prudent, when colder weather returns, to once again drain hoses and irrigation systems, and in extreme cold conditions, turn off spigots and re-winterize systems. It’s a pain, but much better than losing hundreds or even thousands of dollars of plants and lost labor costs, or risking damaged plumbing.

Robert Weaver is editor of The Gateway Gardener magazine.