(This article was first published in The Gateway Gardener January/February 2006 issue.) 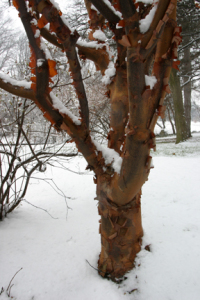 Trees can be a valuable investment and an opportunity to personalize a home. Healthy trees and shrubs requiring a minimum of care can be architectural complements to a home, especially when they have fascinating good looks. Look for these Plants of Merit selections that can add an element of interest day or night all year long and have proven their worth in this region. Each has attractive bark that can be a focal point when highlighted by rain, snow or well-placed landscape lighting. These features may be pleasant alternatives or additions to lonely evergreens sagging in the cold.

The paperbark maple (Acer griseum) is an all-around performer for this region. Her exotic looks are a credit to her homeland of China. Not new to the area, she was introduced in this country in the early 1900s. Slow for growers to propagate, she is just now making an appearance at garden centers and nurseries. Her deep cinnamon to reddish-brown bark is one of her most attractive features. Dressing in paper-thin bark, which sloughs off to reveal a smooth copper bronze skin tone, she cloaks herself in green for the summer before switching to brilliant orange-red in the autumn. As winter grabs hold of the landscape she bares her branches in the cold, exposing her naturally curling bark. Requiring well-drained soil, Acer griseum is happy with either acid or alkaline soil.

Lacebark pine (Pinus bungeana) is also grown for her decorative bark. She is living 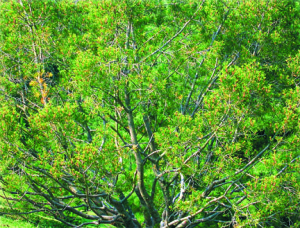 proof that age is before beauty for some! Her multicolored bark was so highly valued in her native China that she became a frequent resident of many temple grounds. Introduced to Europe and North America in the mid 1800’s, she was most often prized by botanical gardens. Unlike many common pines, Pinus bungeana is typically multi-stemmed, and holds needles for several seasons. Her long limbs sweep upward, exposing smooth gray-green bark, which gradually sheds in round scales to reveal patches of pale yellow, olive, brown, red and purple. 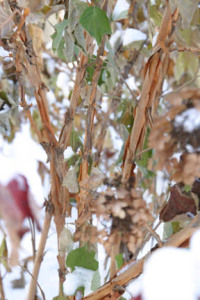 Oakleaf hydrangea ( Hydrangea quercifolia) is an American native. She hails all the way from Tennessee to Florida and west of the Mississippi River. Although she has a naturally good heat tolerance, she transplants to cooler areas very well. She frequently displays an amazing range of fall color to show her appreciation for cooler temperatures. Her relaxed attitude/ habit makes her good company for any informal gatherings of people or plants. In her natural setting, she shies away from hot afternoon sun. She can be found enjoying the company of big burly oaks and the ever-so-handsome hickory. Not petite by any means, she looks most comfortable with plenty of elbowroom. Once settled in with adequate moisture, she holds her space well by sending up plenty of baby shoots from underground stolons. She cloaks each and everyone with felt-like fuzz. Its not until winter steals her bulky bundle of leaves that you see she’s not really so coarse underneath that rough exterior. Her actual frame is surprisingly delicate looking. With thin shreds of bark flaking away, she exposes shades of cinnamon tan and orange bark in a most feminine fashion. To complete her winter wardrobe she wears papery flowers in shades of rusty brown.

MaryAnn Fink was the Plant of Merit Coordinator at the time this article was first published. She is now a garden writer, garden speaker, landscape designer and consultant. Visit her website at MaryAnnFink.com.