Blooming Shrubs with a Second Act 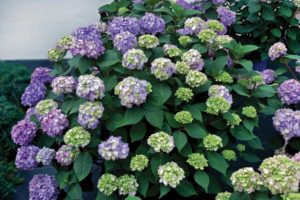 Shrubs are the bones of a mixed border, and provide sculptural height and textural contrast to the perennials and annuals that associate with them. If that’s all they did, it would be enough, but many also provide some color–what a bonus!

(This article was first published in The Gateway Gardener September 2014).)

Shrubs are the bones of a mixed border, and provide sculptural height and textural contrast to the perennials and annuals that associate with them. If that’s all they did, it would be enough, but many also provide some color–what a bonus! Many great shrubs do just that, and today, there’s a double bonus: some of our favorites now have the capability to bloom not once, but repeatedly!

The first heavily marketed such reblooming (remontant is the scientific term for a plant that blooms more than once in a season) shrub I can recall was the Endless Summer® reblooming Hydrangea macrophylla. It promised not only a longer bloom period, but a solution to the problem that has plagued H. macrophylla lovers in our region—loss of a season’s bloom due to cold weather or poorly timed pruning.

Endless Summer is reblooming still, and now in several newer variations. But today, it’s just one of many reblooming species available to gardeners hoping to extend the performance of their garden’s bones. Here are some favorites, from area garden experts.

Since it all began with hydrangeas, we’ll start with them. Every one of our polled experts picked at least one hydrangea among their favorites. Trudy Effinger of Effinger’s Garden Center in Belleville, likes the Let’s Dance® series for their “improved flower coloration and attractive foliage.” (See our cover for a picture of ‘Diva’, one in this Series.) Ann Lapides of Sugar Creek Gardens in Kirkwood concurred. She said the ‘Diva’ lacecap features “colossal blossoms that easily reach over 1 foot across. Graceful and elegant, the massive blooms cascade down the shrub, creating a soothing waterfall of color.” Our other two experts, Tom Mee of Frisella’s Nursery in Defiance, and Patty Lynch of Hillermann’s Nursery & Florist in Washington, went old school with the Endless Summer Series, but noted some of the Series’ newer additions. Tom not only noted the beautiful, repeating blooms, but added of the ‘Twist n Shout’ selection in this series, “ in late summer or early fall the leaves turn to orange and red finally ending with a deep maroon before defoliating. This is a great pick that provides interest beyond blooms.” Patty couldn’t contain herself, and listed three Endless Summer favorites: the original pink/blue snowball, the ‘Blushing Bride’ white-pink bloomer, and ‘Bloomstruck’, with purple/rose blossoms.

I first heard about reblooming azaleas a couple years ago, at which time they were being sold mostly in the South, and I presumed they didn’t perform as well here. But experts in 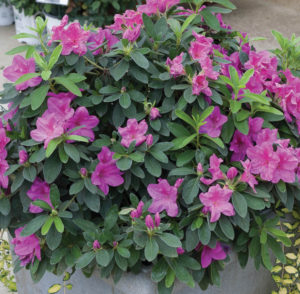 the industry say otherwise. Our pros were nearly as unanimous with their choice of an azalea among their picks as they were with hydrangeas: Bloom-A-Thon®! Ann Lapides

couldn’t pick a favorite in the Series, describing the various options of, “lilac, pink, red or white, that appear first in the spring, then again throughout summer and well into fall.” Tom Mee likes the Lavender in particular, which he says “is the strongest in the Series for our area,” while Patty Lynch chose the Pink. You may also find another reblooming azalea series, named (appropriately) the ReBLOOM™ Azaleas.

Grandma’s Plants Get a Makeover! 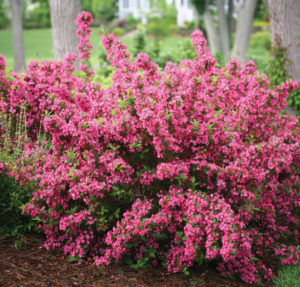 Several of the old-fashioned shrubs I throw into a “grandma’s plants” category, including lilac, weigela, abelia and mock orange, have entered the 21st Century with reblooming panache! Each of our panel of pros had an updated oldie-but-goody to recommend. For Trudy Effinger, it was Sonic Bloom™ Weigela, with its “heavy-blooming, showy May flowers followed by repeat blooms until frost.” Ann Lapides recommended the ‘Snow White’ Mock Orange, which not only is a repeat bloomer, but features double blossoms as well! “Double pristine white blossoms give a spice orange scent in spring, then repeat in late summer!” Another fragrant choice is Tom Mee’s pick, Bloomerang® Purple Lilac, which has the added bonus of being mildew resistant, a common plight of the traditional spring lilac. Finally, Patty Lynch offered the ‘Rose Creek’ Abelia, which she describes as featuring a dense, compact growth “with shiny evergreen foliage. Clusters of white tubular flowers appear in late spring.”

Some, if not all, of these re-imagined old-fashioned plants may require pruning after the initial bloom period to encourage the best re-bloom. All of the rebloomers will most likely be most prolific in their traditional season of bloom, with perhaps less dramatic flair for follow up. And there’s a bit of a “buyer beware” caveat associated with some re-blooming hydrangeas, claiming more marketing than substance in some cases. The esteemed hydrangea expert Dr. Michael Dirr has published findings of a field study on remontant hydrangeas, which you can find at www.dirrplants.com. But the study is now 4-5 years old, so newer introductions may perform even better than the groundbreakers. At least our experts think so!

Robert Weaver is editor and owner of The Gateway Gardener magazine.