(This article was originally published in The Gateway Gardener October 2007 issue.) 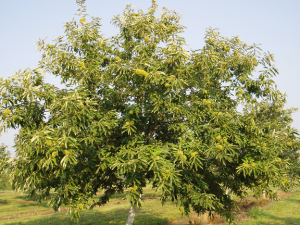 When many people think of nut trees in the home landscape, they cringe at the thought of a messy black walnut dropping tennis-ball-sized bombs all over the lawn and staining their patio with the black-as-ink residue that coats the inner lining of the outer ovary wall.  But, according to Wayne Lovelace,  owner  of Forrest Keeling Nursery, there are a number of nut trees that can be recommended for prominence in home landscapes, while others are worth placing in an out-of-the-way spot to enjoy the sweet,  meaty nuts they produce. Here are some of his suggestions.

Number one on Wayne’s Top Nut Trees For Home Landscapes list is the Missouri and Illinois native pecan (Carya illinoinensis).  These trees, according to Wayne, are fairly neat as nut trees go, and produce sweet-tasting, meaty nuts enjoyed by both two- and four-legged animals. At maturity, they make an elegantly shaped shade tree, with a tall, straight trunk and “uniform, symmetrical, broadly oval crown” according to Michael Dirr’s Manual of Woody Landscape Plants. As natives, they are naturally hardy in our area, and the selected cultivars aren’t troubled by significant pest or disease problems. Wayne recommends two local selections, ‘Peruque’ and ‘Colby’. The nuts from these trees are large and thin-shelled, and produce up to 50% or more meat. Other varieties Wayne likes include ‘Pawnee’ and ‘Kanza’.

Just because they’re horribly messy doesn’t mean walnuts don’t have a place in certain landscapes. And one, the Carpathian walnut (Juglans regia var. carpathian) may even deserve a place as a lawn tree (though, as with all trees in the Juglans genus, it imparts a chemical call juglone into the soil, which inhibits growth of many plants, including turf, within its root zone). A non-native English walnut, the Carpathian is more cold-hardy than other English walnuts, and Wayne recommends the ‘Sommer’ cultivar which has proven to be cold hardy to –25 degrees F. Though it drops large nuts just as its native black walnut cousin, they are thin shelled and separate easily from the outer fleshy covering. The tree’s habit features a rounded, spreading crown, reaching a mature height of 40-60’. Wayne says they are fairly disease free, and relatively easy to transplant and grow.

Even the Eastern Black Walnut (Juglans nigra) shouldn’t necessarily be banned from home landscapes, says Wayne, though it might best be placed in a less-manicured, out-of-the-way area where  its mess won’t be a nuisance. Selections that provide a milder flavor and lighter meat than the pure species, according to Wayne, include ‘Sauber’, ‘Emma Kay’,  the thin-shelled ‘Kwik Krop’, and ‘Sparrow.’

(Ed. note–this article was written before the threat of 1000 cankers disease of walnut became a concern. Though this disease hasn’t yet reached Missouri, it could have devastating effects on our native walnut trees. In light of the danger, it might be best to consider alternative nut trees for the time being.)

Wayne says the native American Filbert (Corylus americana) makes an excellent hedge or screening plant, especially in informal, naturalized landscapes designed to attract wildlife. The nut is edible, but considered more desirable by birds, squirrels, deer and other critters. They require a large area, as they can grow up to 20’ or more in height and 15’ in width.  Fall color can be an attractive red-to-orange.

Unlike its blight-decimated American cousin, the Chinese chestnut (Castanea mollissima) is disease free and bears similar edible nuts, though they come encased in a bur-covered shell that some might find a nuisance. An attractive wide-branching 40-ft. tree in its own right, the Chinese chestnut has been grafted to the American chestnut to produce trees that are blight resistant, but with characteristics more closely resembling the native tree, including a sweeter-tasting nut. ‘Dunstan’ and ‘Qing’ are two such cultivars. The root stocks on these grafted trees are proving to have some longevity problems, though, according to Wayne’s observations, and he thinks a safer bet for now might include own-root hybrid seedlings from varieties like ‘Eaton’,  ‘Sleeping Giant’ ‘Peach’ or ‘Homestead’.

Finally, Wayne says you can’t go wrong with a couple of Missouri native classics, the shellbark (Carya laciniosa) and shagbark (C. ovata) hickories. Both are stately, high-branching shade trees with excellent yellow-gold fall color , attractive “shaggy” bark for winter interest, and are abundant producers of sweet nuts enjoyed by people and a favorite of wildlife. Maybe not the tree for patioside, but in a naturalized backyard landscape, you’d be nuts not to include the hickories.

Except for the Chinese chestnut and American filbert, the trees featured in this article are in the Juglandaceae family, and share many common characteristics. Among those similarities are that they have deep taproots, and therefore don’t transplant easily, so pick a site where they’ll be happy for a long, long time, and buy them from a reputable nursery—don’t attempt to dig them from natural habitats. Secondly, they are not prolific self-pollinators, so for best nut production, you should plant two different varieties that flower at the same time. Sellers’ resources can tell you which varieties would be compatible co-pollinators. This isn’t necessary for the chestnut or filbert.

That said, Wayne offers a few other growing tips. Choose a site with well-draining, loamy soil, though trees can tolerate a wide-range of soil conditions as long as it’s not soggy. He recommends planting in the fall in October or November and fertilizing at planting and each subsequent fall with a slow-release fertilizer at the following rates:

Thanks to Wayne Lovelace, owner of Forrest Keeling Nursery, for providing the recommendations and much of the information in this article. Forrest Keeling specializes in growing Missouri native trees, nut trees, and other woody plant species for the Gateway growing area. They are located at 88 Keeling Lane in Elsberry, MO. You can reach them at (800) FKN-5803, or visit their website at www.fknursery.com.