A Tribute to Cindy Gilberg: Our Own Missouri Native 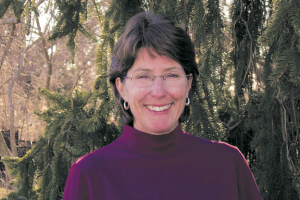 (Editor’s Note: The following tribute to Cindy Gilberg was first published in The Gateway Gardener July/August 2014, distributed beginning June 28th. At the time, we knew Cindy was very ill, and we wanted to recognize her many industry achievements while she was still able to receive the appreciation. Cindy passed away just a few days later on June 30th, 2014. Here, we have supplemented the original tribute with several other comments and remembrances since received.) 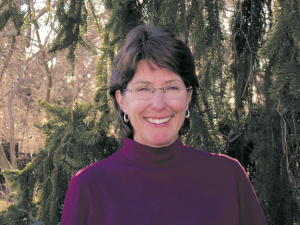 In the publishing business it’s understood that readers generally don’t write when they’re happy, only when they’re unhappy. I suppose, then, it’s a good thing I don’t receive much correspondence from readers. Only in one instance did the magazine provoke a significant response: a few years ago, due to space constraints, I withheld Cindy Gilberg’s regular column on gardening with natives. Readers quickly let me know that, hold whatever else, Cindy’s column would be, and was thereafter, untouchable! And so it has been until last month when Cindy allowed a stand-in from her co-worker at Shaw Nature Reserve, Scott Woodbury. And in this issue, we again give Cindy a break by turning the tables and writing ABOUT our readers’ favorite native expert.

I first met Cindy Gilberg in 2005, when we had just begun publishing The Gateway Gardener. I called on her at Gilberg Perennial Farms in Wildwood, a nursery she and her husband Doug had owned and managed for nearly three decades. It was immediately apparent this was an uncommon garden center. Their specialization in herbaceous perennials, aquatic plants, herbs and native plants, highlighted by the country surroundings and beautiful garden displays had given Gilberg’s a reputation as a must-visit destination for gardeners in the know. 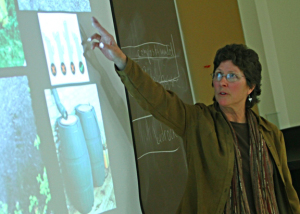 Cindy teaching a class on rainscaping at the Missouri Botanical Garden “Garden Blitz”.

gardeners alike,” recalls Steffie Littlefield of Garden Heights Nursery and a longtime industry associate of Cindy’s. “She and Doug brought many new varieties to St. Louis and ignited a passion in visitors to experiment with new combinations of plants that would thrive for years to come.”

Another industry associate and friend, Ellen Barredo of Bowood Farms also noted Cindy’s influence. “Years ago, she was the go-to perennial guru for all kinds of perennial information when one needed help. At Gilberg Perennial Farms you could see the latest and greatest in hand-selected new introductions in perennials for our area as well as tried and true. I always enjoyed the native department as she stocked natives when no other nursery carried them. But my very favorite section at Gilberg’s was the herb department. Cindy had a full selection of culinary and aromatic herbs seldom found in St Louis. When you walk around Bowood you can see a little bit of Cindy in all of the plants.”

Cindy has influenced the styles and plant palettes of many gardeners through the years, and has been a tireless advocate for the green industry. She has organized countless workshops to educate gardeners, especially about the relatively unknown (then) world of perennials. Nationally, she has served on the Board of Directors for the Perennial Plant Association, and was a driving force in organizing that group’s symposium when St. Louis hosted it in 2009. Locally she has been a board member and is a past president of the Horticulture Co-op of Greater St. Louis.

After she and Doug closed the garden center, she turned her focus to consulting, garden design, teaching and writing, especially as all those related to the promotion of native plants and native gardening. She started contributing monthly articles to The Gateway Gardener in 2007. About that same time, she began working part-time in the Horticulture Department at Shaw Nature Reserve part of Missouri Botanical Garden. In 2010, she and her mother, Barbara Perry Lawton, co-authored a wonderful, informative book on the history and attractions of Shaw Nature Reserve (Missouri Botanical Garden’s Shaw Nature Reserve: 85 Years of Natural Wonders). 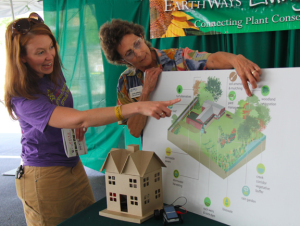 In 2009 she became involved with the Deer Creek Watershed Alliance as Project Horticulturist, and was recognized by that organization earlier this year with its Certificate of Excellence Award for her vast contributions toward their programs to promote rainscaping with native plants.

“Her move to the Shaw Nature Reserve brought with it a huge following of gardeners who were prime to shift their focus to native and rain garden plants,” says Steffie. “This natural progression certainly brought with it a revolutionary change in backyard gardening from high maintenance or invasive imports to an awareness of a larger palette of indigenous plants. She has always taught and consulted anyone who reached out for more information. It is safe to say that all gardeners, professional and amateur, in the metro area have been formally or informally her eager students, and our work and gardens are better for it.” 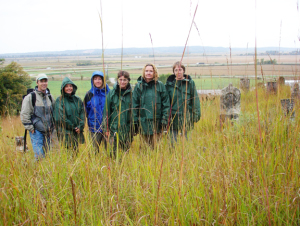 Cindy once visited my home when I was just establishing a dedicated native garden. She brought with her a gift of native false aloe (Manfreda virginica).  Some 8-9 nine years later, it continues to thrive in the garden and reminds me of her. It’s not the showiest plant in the garden; the flowers are relatively insignificant. But it’s a favorite among pollinating visitors nonetheless. And it’s a tough-as-nails little plant. 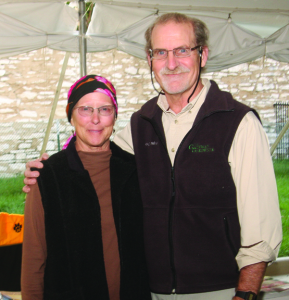 Cindy and I traveled in the many of the same circles, such as here at the 2012 Green Homes Festival.

Thanks Cindy for being a friend and valuable contributor to The Gateway Gardener, and an advocate for native plants and gardening throughout the region.

“Cindy was a legend, even in my city neighborhood. Budding urban gardeners would make the 40-minute trek west — almost a pilgrimage — to Gilberg Perennial Farms to see the wealth of innovative flowering and foliage plants that Cindy packed into her country place. She and her husband Doug were pioneers in the wave of popularity for perennials that crested some 20 years later. But early on, Cindy taught us cheerfully and patiently about gorgeous plants that come back year after year and supplement or take the place of fussy bedding annuals. Her plants would start out small but grow the second and third years to give us gorgeous specimens to divide and fill our gardens. Cindy may have single-handedly changed the St. Louis landscape.”
–Becky Homan, retired Garden Editor, St. Louis Post-Dispatch

“Cindy Gilberg grew up in Missouri in touch with nature before the age of electronic devices. As a youngster her parents took her snorkeling in Ozark streams in search of cool waters and underwater critters. They hiked natural areas in search of plants and ferns and things wild. As a young girl Cindy met Edgar Denison on a path at Emmenegger Park where he was hammering rocks in search of fossils… “crack-crack-crack”. Later in life, when Cindy founded Gilberg Perennial Farm, she was visited regularly by Edgar who edited plant descriptions. Cindy walked natures paths throughout her life. She picked wild mushrooms and “weeds” and grew vegetables which she and husband Doug fed to their children Becca and Nate, who are now grown up. The fruit doesn’t fall far from the tree. 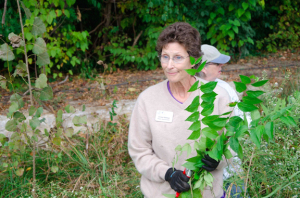 “She pursued a passion for horticulture and received a degree in ornamental horticulture from University of Missouri-Columbia. Cindy fine-tuned the art of gardening as co-owner of Gilberg Perennial Farms, a garden center that offered a wide array of unusual, hard-to-find perennials. Here, she developed extensive display gardens and devoted herself to educating the gardening public. After closing the garden center, Cindy focused on assisting people with landscape design, storm water management, native plant landscaping and creating habitat gardens. Significant projects that Cindy was intimately involved include work with the Whitmire Wildflower Garden at Shaw Nature Reserve and the Deer Creek Watershed Alliance, both part of the Missouri Botanical Garden. In the recent past, Cindy had been president of the Greater St Louis Horticulture Co-op, Midwest Director for the Perennial Plant Association and Manager of the Wildwood Farms Community Garden.

“Starting in 1993, Cindy collaborated with Shaw Nature Reserve as an event speaker and tour leader for the Native Plant Conference and later Native Plant School, both held in the Shaw Nature Reserve. In 2006 she began working in the Whitmire Wildflower Garden (Shaw Nature Reserve) designing, installing and maintaining native plantings. She got her feet wet in the woodland and rain gardens and has since become an authority on the subjects. Her expertise with rain gardening earned her key positions working with the Rainscape Rebates program and Missouri Botanical Garden’s Rainscaping webpage. Her ideas on native plants and landscaping are chronicled over the past decade through regular contributions to the News from Native Plant School Newsletter, The Gateway Gardener, Healthy Planet, the Kansas City Gardener and Missouri Ruralist. Cindy  taught many horticulture classes for the region’s garden community, both residential and commercial, for the last 30 years.  She was a regular instructor at Missouri Botanical Garden and Shaw Nature Reserve’s Native Plant School. Also, with garden writer and mother Barbara Perry Lawton, Cindy co-wrote Shaw Nature Reserve: 85 years of Natural Wonders.

“Cindy has touched each of us in so many ways. She brought cheer to our team every day. She brought perspective to complicated and difficult situations. She created beauty and function in so many gardens. She saw goodness in everything. She led by example and glowed with good karma. She will be missed!”
–Scott Woodbury, Curator, Whitmire Wildflower Garden, Shaw Nature Reserve

“Cindy and Doug inspired me to open my own nursery which is now 30 years old. Gilberg’s was a paradise for plant lovers. I still have original stock plants (society garlic most notably) that I got at Gilberg’s 25 years ago.”
–Christine Kelley, owner, Cottage Gardens, Piasa, IL.

“What an inspiration to anyone that met her or read her work. My heart goes out to her family and friends. Cindy, your kindness and love of nature will be missed.”
–Erika Rolland, Facebook

“She was such an inspiration to me. I enjoyed being her sales rep for many years. Never forget all the advise and knowledge she shared with me and my love for plants.”
–Alice Hoehne Long, Facebook

“From Gilberg’s Perennials to her articles and talks she has been an inspiration to me as a gardener for literally decades.”
Patti Grumke-Laffoon, Facebook

“Although I never had the pleasure of meeting Cindy, I always looked forward to her articles. May she rest in peace and that all her family and friends will be comforted with all of the good times and wonderful memories.”
–Terry Cox, Facebook

“We are all deeply saddened in light of her passing. And eternally grateful for all the care and support she shared with EarthWays and Missouri Botanical Garden.”
–EarthWays Center, Facebook

“Sending a huge thank you to the Gilbergs for many fond memories of trips to Gilberg Farms. Also, sending my sympathy to Cindy’s family and friends.”
–Linda Laferriere, Facebook

“Amazing woman. Amazing passion. Amazing knowledge. Blessings to her family, her friends, and all who she shared her love of plants.”
–Sugar Mommas Candies, Home-Made Pies, Gifts, Facebook