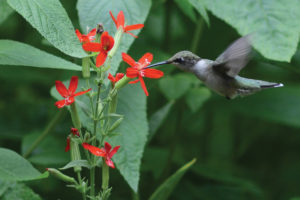 When the red buckeye and columbine bloom in April, it signals the time to start looking for the ruby-throated hummingbirds.

[This article was first published in The Gateway Gardener April 2016 issue.]

When the red buckeye and columbine bloom in April, it signals the time to start looking for the ruby-throated hummingbirds.

It pays to look in the right place at the right time and keep a pair of binoculars handy. Recently I witnessed a hummingbird flying back and forth to a spider web near the porch where I sip my morning coffee. It was plucking insects from the web faster than you can say “silk pajamas.” Makes me wonder what in the world was going on. Spiders and hummingbirds have been on Earth together for 22 million years. Over time have they worked out a survival method that benefits both or do victimized spiders plot revenge? I’ve read that orb-weaver spiders can capture hummingbirds. Do hummingbirds somehow protect spiders from other prey? Is there a statute of limitations on stolen goods in the natural garden? Does the spider even notice or is she offering gifts? Things to ponder on the patio over a cup of coffee. The garden never ceases to amaze me.

Hummingbirds have a remarkable ability to extract nectar and pollen from the largest-flowering native plants using a two-inch long tongue. The tongue can lap nectar 13 times per second. Now that’s humming! Their favorite native plants include trumpet creeper, red buckeye, coral honeysuckle, crossvine, wild bergamot, American aloe and wild columbine. When red buckeye and columbine begin blooming in April it’s time to look for ruby-throated hummingbirds that are returning from central America. Like most people, they prefer bright red and orange flowering plants like copper iris, jewelweed, cardinal flower, Indian pink, and royal catchfly but visit flowers of other colors too. I’ve seen them on 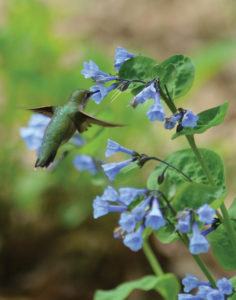 You may be lucky enough to see a nesting hummingbird so it never hurts to prepare. They use milkweed, dandelion and thistle seed fluff to line nests. Mosses and lichens camouflage the outside of the nest cup and sticky spider web strands hold everything together. They even use pine sap to stick the nest to a branch. Gardens full of native plant diversity are usually home to garden spiders so keep an eye on webs. Hummingbirds feed their young mosquitos, yes mosquitos! They also feed on gnats, fruit flies, bees, spiders, caterpillars and aphids; all common insects that are attracted to gardens full of native plants. The other thing to keep in mind is that everything is tiny with hummingbirds so it helps to have good binoculars. I have owned a number of binoculars over the years and have been frustrated looking at wildlife until I discovered the Nikon Monarch binocular. I can see clearly now!

With native plant sales popping up across the region, you won’t have any trouble finding native plants near you. Visit Grow Native! for a plant sale near you and happy gardening ya’ll!

Horticulturist Scott Woodbury is the Curator of the Whitmire Wildflower Garden at Shaw Nature Reserve, where he has worked with native plant propagation, design, and education for more than 20 years. He is also an advisor to the Missouri Prairie Foundation’s GrowNative! program.