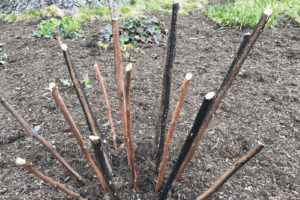 I took my first steps in horticulture walking down a narrow path of age-old gardening traditions. I learned to care for vegetable gardens, a rose garden, a lilac screen and perennial borders each with squarely trimmed hedges and edges. The lawn was cut in a diamond pattern using an old-style reel mower.

I took my first steps in horticulture walking down a narrow path of age-old gardening traditions. I learned to care for vegetable gardens, a rose garden, a lilac screen and perennial borders each with squarely trimmed hedges and edges. The lawn was cut in a diamond pattern using an old-style reel mower. Here weeds were banished, soil was cultivated (not mulched), yew and privet were sculpted, edges were straight as a yard-stick and not a blade or stalk strayed out of place. The compost piles were huge, especially in autumn when the garden was “put to bed”. You get the picture…formal garden. I spent my first-ever job in 7th grade here, raking leaves, cutting down stalks and starting a new compost pile. I’ve been raking leaves and cutting dead stalks ever since. Well, almost ever since. I’ve recently learned that plant stalks in gardens, like in nature, have value. They are home to overwintering bee larvae. They are ambush perches for migrating flycatchers and seed stores for hungry birds (and mammals) when it snows. They are lifesaving wind screens from the bitter cold and building materials for nesting birds.

Heather Holm, author of Pollinators of Native Plants, says that bees need standing plant stems and prefer cut stems because it’s easier to access the pithy center where they dig in to lay eggs in spring. Eggs develop into larvae in summer that overwinter inside the dead plant stem. Heather recommends cutting stems 15-20 inches tall in late winter.

If you happen to cut all the stalks down in winter you can cut stems from elsewhere and bring them into your garden in March. Sumac and sunflower stalks work well because they last into the second season better than wild bergamot and goldenrod. Simply cut an armful of stems being sure to get the thickest portion low to the ground. Stab them into the soil at least four inches deep leaving fifteen to twenty inches standing above ground with a cut end exposed. Bees are attracted to the cut ends where they drill into the soft pith to lay their eggs. Feel free to get creative with your arrangement of ten to twenty stems per cluster. I was amazed this past spring to see so much bee activity April thru June. It really worked.

Another spring activity in the garden is bird nesting and it turns out that birds often use seed heads to build a nest. One recent survey of nests found that there were 150 species of seeds discovered in the nests of one bird species. Here is another great reason to keep some of those stalks standing into spring. 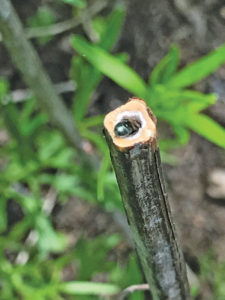 A small native bee in a bergamot stem. Photo by Scott Woodbury

Finally, standing stalks hold a significant amount of seed going into winter, I’d guess between 5-10 percent. The rest has fallen to the ground where birds tend to browse the most, except when it snows. With snow on the ground, birds shift gears and begin feeding on the tops of the plants. Plants that hold some seed include blazingstar, black-eyed Susan, aster, goldenrod, mountain mint, wild bergamot and native grasses. On cold snowy days it’s fun to watch sparrows and finches working seed clusters high up on the stem while juncos feed on seed in the snow. That’s teamwork in action; one of the reasons why birds flock in mixed species during winter.

Reading all this you might be tempted to keep every stem standing in your garden, but three things will likely happen. One, many stems aren’t strong enough to remain standing and they flop over either in winter or spring. Cut these stems off when they become unsightly at ground level. Second, if you began leaving all your stems, you would probably receive a complaint from a neighbor that would result in a citation to cut it down. Thirdly, you may not want some species spreading aggressively from seed like Joe-pye weed, goldenrod (most species), golden Alexander, New England aster, river oats and switchgrass. If you want to prevent them from spreading deadhead them just after they are done blooming. Birds won’t be able to eat them but if you leave the stalks standing in spring you will attract bees. Here are some tricks to creative stalking! In winter, cut flopping stalks out, keeping the sturdier ones that remain standing. You will find that plants like ironweed, blazingstar, Joe-pye weed and sunflower are sturdy and stand up well through winter and into the following spring and summer. In late winter cut these species and others like them to fifteen to twenty inches in height. You don’t have to leave every clump standing. Select perhaps 25 percent or more of the total number of plants. When you mulch around them in late winter or early spring they will look like a traditional flower bed and will go unnoticed by persnickety neighbors. Happy gardening!

Horticulturist Scott Woodbury is the Curator of the Whitmire Wildflower Garden at Shaw Nature Reserve in Gray Summit, MO, where he has worked with native plant propagation, design, and education for 25 years. He also is an advisor to the Missouri Prairie Foundation’s Grow Native! program. Find suppliers of berry-producing native plants at www.grownative.org, Resource Guide.