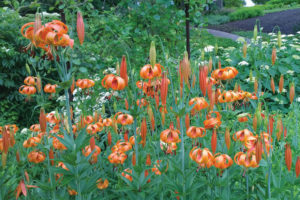 Like children, the summer lilies in the native garden are painfully slow to grow. That’s why when we finally produced a lovely show of flowers, it gave a sense of accomplishment, like when our son began using the words please and thank you, oh the relief.

[This article was first published in The Gateway Gardener July/August 2016 issue.]

Like children, the summer lilies in the native garden are painfully slow to grow. That’s why when we finally produced a lovely show of flowers, it gave a sense of accomplishment, like when our son began using the words please and thank you, oh the relief. We have been nurturing patches of Michigan lily, Lilium michiganense and bunchflower lily, Melanthium virginicum for over a decade in the Whitmire Garden. In recent years they have become glorious. The Michigan lily was grown from bulbs and bulb scales propagated by division thanks to lily-gardener friend and Wild Ones member Kathy Bildner who has the most impressive patch of lilies in town. Expect plants to bloom in three to five years when grown from scales. Scales are like cloves on a head of garlic. The thin outer-edge pieces are the scales. The heftier center is the bulb. Michigan lily is happy growing in a half-day of full sun with no deer. Lilies are a deer’s best friend and so deer are excluded from our garden by a 9-foot tall fence.

Bunchflower lily, Melanthium virginicum came to us by seed collected in a wet prairie in 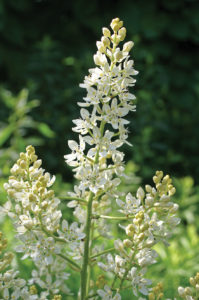 Rosati, Missouri. From seed it takes about five years to begin flowering and more years to flower well. In the first three years the seedlings look like weedy grass and so care must be given to keep the weeds out. Once you have flowering plants I recommend leaving them alone. Though you can divide decade-old clumps, division will set them back years. Leaves are like bold-textured bows tied to the earth. The creamy-white flowers are densely bunched on the tops of four-foot stalks. The late Cindy Gilberg described the scent of the flowers to me once. Cindy was an equestrian and so easily picked up the subtle resemblance to wet horses. Memories and scents form tight bonds and if I forget all else, this memory will surely stay with me. 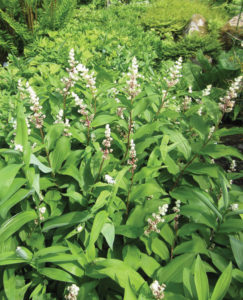 Into the Woods, a favorite movie of mine, reminds me of two other lilies, great Solomon’s seal, Polygonatum caniculatum and Solomon’s plume, Maianthemum virginicum. Both grow in woodlands and are as immune to deer browse as Bissinger’s chocolate is immune to my wife. It is deer candy. At Shaw Nature Reserve I find both species growing on the steepest slopes at the edge of the Meramec River where deer prefer not to trek. Great Solomon’s seal blooms in May but fruits in summer. A less common name is dropberry which adequately describes the hidden round purple fruits that dangle beneath horizontal stems and leaves like earrings on an African queen. Seedlings take many years to mature and so plants are typically grown by rhizome division. Plants spread moderately into substantial colonies with stalks three feet tall. The bold-textured wide leaves stand out in the woodland garden.

Solomon’s plume, which is also called false Solomon’s seal, differs by having flowers in spring and berries in summer clustered at the end of 18-inch stalks. Bright red berries are showy, visible, and edible. In some years the foliage is riddled with holes, no doubt the result of an abundant hatch of a sawfly or moth species. My loss in the native garden is the gain to a clutch of fat and sassy baby birds. That is, after all, who I am gardening for. Happy gardening!