Native Plants of the Ozark Highlands 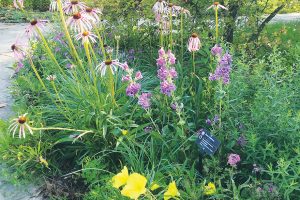 More species of plants exist in the Ozark Highlands (one of the oldest mountain ranges on the planet) than anywhere in the lower Mid-west. Why?

(This article was first published in The Gateway Gardener April 2021 issue.)

It is said that blues musician Robert Johnson (Tommy Johnson in the movie, O Brother Where Art Thou) sold his soul to the devil (for musical virtuosity) at the crossroads in Clarksdale, Mississippi. More famous blues musicians originated from this area (and migrated there), than anywhere in the country. In much the same way, more species of plants exist in the Ozark Highlands (one of the oldest mountain ranges on the planet) than anywhere in the lower Mid-west. Why? Because the Ozarks are an ancient crossroads for migrating plants. They are a tapestry of plants, uprooted and on the run from ever-changing climate and advancing glaciers.

During the last two million years, many plants and animals migrated to the warmer climate of the Ozarks as they were pushed south and west by advancing glaciers. As the climate warmed, and glaciers retreated back north, most cooler-loving species followed. But some species (called glacial relics) stayed behind. They found refuge in the bottoms of cool sinkholes, north-facing slopes, box canyons, and wetland fens. To this day, glacially disconnected animals like wood frogs and four-toed salamanders still hang out in these cool and moist, shady safe-havens, while the majority of their population exists far to the north and east. 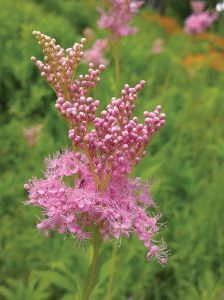 Filapendula rubra, Queen of the Prairie, photo by Scott Woodbury

The same is true of plants like queen-of-the-prairie (Filapendula rubra) and Ridell’s goldenrod (Solidago ridellii), both living in wetland fens, and also harebell (Campanula rotundifolia) and white camas (Zigadenus elegans) that cling to north-facing bluffs along the Jacks Fork River. These are disconnected species (called disjunct) because they exist beyond or at the edge of their natural ranges. According to Dr. Julian Steyermark, author of The Flora of Missouri, many other plants have found a second home in the Ozarks, beyond or at the edge of their normal ranges, including tall larkspur (Delphinium exaltatum), barren strawberry (Waldsteinia virginiana), soapweed (Yucca glauca), dwarf crested iris (Iris cristata), common witch hazel (Hamamelus virginiana), beautyberry (Callicarpa americana), mountain azalea (Rhodadendron prinophyllum), rose turtlehead (Chelone obliqua), yellowwood (Cladrastis 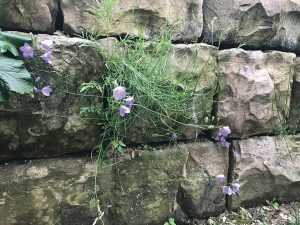 But what about the plants that originally came from the Ozark crossroads, and never left home (called endemic)? They apparently began to evolve there (and continue to evolve) one hundred million years ago. Not quite as old as the five hundred million years old hills, but pretty old never-the-less. Common garden plants endemic to the Ozarks include woodland spiderwort (Tradescantia ernestiana), Fremont’s leatherflower (Clematis fremontii), little-flower 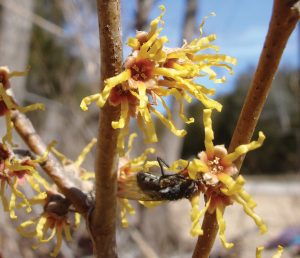 So if you are taken by the origin stories of native plants, like I am, then pick up a few Ozark native plants the next time you are at a garden center or plant sale near you. They have been around a long, long time, and chances are, they will continue to hang on, deep in the Ozark Highlands, and possibly in your back yard. Happy gardening!

Horticulturist Scott Woodbury is the Curator of the Whitmire Wildflower Garden at Shaw Nature Reserve in Gray Summit, MO, where he has worked with native plant propagation, design, and education for 30 years. He also is an advisor to the Missouri Prairie Foundation’s Grow Native! program. Find suppliers of native plants and seeds at www.grownative.org, Resource Guide.