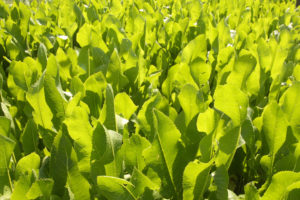 For years I have referred to horseradish as a root vegetable that is thankfully perennial. This pungent root that can be grated or processed into a strongly flavored garnish for meats and vegetables, grows very well in our loamy soils and with hot dry summers.

[This article was first published in The Gateway Gardener June 2018 issue.]

For years I have referred to horseradish as a root vegetable that is thankfully perennial. This pungent root that can be grated or processed into a strongly flavored garnish for meats and vegetables, grows very well in our loamy soils and with hot dry summers. Horseradish was brought to this country by the German immigrants who settled communities in southwestern Illinois. This area was known for its horseradish sauce and blanched white asparagus, another Old World delicacy. I feel fortunate to have some very desirable roots from a German Illinois farmer. These were given to a previous employer who in turn found he had more roots potted up than he needed and shared a couple of trays of plant starts with me. I proceeded to plant them in my vegetable garden at Edg-Clif Farms were I have placed them in a circle around my potato bins. These make excellent companions for organic gardening because the horseradish greens repel the Colorado potato bug from the potatoes plants. One of nature’s perfect symbiotic relationships between plants.

My husband has faithfully made homemade horseradish sauce every winter from the thick roots. The plant grows every spring from small roots left in the ground after harvesting. These plants can get to be 30” tall and form a clump up to 2’ wide. The foliage is very frost hardy and can be harvested young to use as salad greens in spring or fall. The roots should not be dug until after they have experienced the cold temperatures that result from two hard freezes in the late fall. In our area this usually means we can dig horseradish around Thanksgiving and process it for gifts at the Holidays. The timing is perfect for those hardy winter meals of pot roasts and meatloaf. The graded root becomes milder as it is stored for several months waiting to be used. The milder preparations are perfect for salad dressings, cocktail sauce for seafood and vegetable dips used in casual summer meals. Some of the graded root can be dried and then further ground to make a powdered seasoning for Asian cooking similar to ‘wasabi’.

So the debate over whether horseradish is an herb or vegetable is finally to be resolved when it was named the Herb of the Year in 2011 by the International Herb Society. After further research, herb is a proper designation since horseradish was cultivated originally by ancient people as a medicinal herb. In modern times it has been defined as such since it is really used only in small quantities and then mainly as a flavoring. One plant can be enough for one household and easily divided to make more plants if desired. Horseradish likes an open position and a light rich soil to produce thick roots. But honestly, it grows like a weed in most soils and sun exposures. Of course the folks across the river in the Collinsville region where much of the world’s horseradish is grown give credit to the soil’s high levels of potassium for the especially hot nature of their crops. So if you want it hot, add some potash to your soil! Otherwise, if there ever was a foolproof plant, horseradish is it. Just plant it in spring and forget it until November. Then get your taste buds and sinuses ready for an amazing experience when you grate your own horseradish.

Steffie Litlefield is a St. Louis area horticulturist and garden designer. She is part owner of Edg-Clif Winery in Potosi, MO, and has been a regular contributor of articles to The Gateway Gardener since 2005.